Good For Bikes! Good For Business! Several years ago, the City of Los Angeles embarked on an ambitious campaign to provide bicycle parking throughout the city in order to encourage cycling as a form of transportation. Cyclists were grateful!
In 2004, the LADOT installed over 800 Inverted U Bike Racks bringing the Citywide total to 2500 bike racks in the City of Los Angeles.

In 2005, the LADOT promised to install another 600 Inverted U Bike Racks, all on city-owned property, usually sidewalks of adequate width. Cyclists were pleased!

Somewhere along the way the Bicycle Parking Program became low priority for the Bikeways Department of the LADOT and the bike racks began collecting dust in a warehouse in Van Nuys. Cyclists didn’t say anything. In 2006, the Bikeways Coordinator for the LADOT Bikeways Department explained that the Bike Parking Program was on hold because of staffing issues. (The Department consists of a Coordinator, a Lead Engineer and 9 other Engineers!) Cyclists still didn’t say anything.

In 2007, the Bicycle Advisory Committee for the City of Los Angeles met for its regular bimonthly meeting in the Board Room of the DWP Building. Cyclists spoke up!

As part of a ride called “Storm the Bastille” the cyclists gathered at the Santa Monica/Vermont Red Line Station and rode to the BAC meeting, this time prepared to focus their Public Comment energy on the subject of Bike Parking in LA. Representing communities from San Pedro to Highland Park to Hollywood to the San Fernando Valley, the cyclists asked the LADOT to revive the dormant Bike Parking Program. Cyclists called on the LADOT to act! The City of Los Angeles currently has an average of 6 bike racks per square mile. Cyclists complain that in spite off all the talk, the City has failed to offer the most basic support for the cycling community; safe and secure parking facilities. To make it worse, it’s still illegal to lock your bike to a parking meter in the City of LA.

The Inverted U Rack is simple, it doesn’t take up much room, it’s cheap, it’s effective and it works.

If you’d like to see more of these bike racks in Los Angeles send an email to bikeracks@illuminateLA.com with the following info: If you’d like to know more about Bicycle Parking take a look at the recommendations from the Association of Pedestrian and Bicycle Professionals. "The Year Of The Cyclist!" - Halfway Six months ago, in a fit of “Oh Yeah?” one-upsmanship, I committed to recognizing the “Year of the Cyclist” (Chinese Year 4705) by riding 4705 km during the upcoming year.

Today is the halfway point on that journey and I’m proud to report that so far I’ve ridden 3735.7 kilometers toward my goal of 4705.

It’s been a great year for riding. Because I work with Neighborhood Councils throughout the city, I’ve had the opportunity to ride to the four corners of Los Angeles on a regular basis. I’ve taken long serendipitous tours of neighborhoods from San Pedro to Chatsworth and from West Adams to Eagle Rock, all in the spirit of adventure and discovery.

Along the way, my trusty Marin gave out. I was riding down Vermont one day when I became aware of the Marin’s extremely comfortable ride. In the 5000+ miles I’d put on the Marin, I’d never fully noticed how smooth it rode, especially over a rough road such as Vermont. Then I realized that the amazing flex I experienced in the frame was due to the two significant cracks, one at the seat post and the other at the bottom bracket! I was sad. The Marin served me well.

I replaced the Marin with a LeMans Centurion, rescuing it from its retirement in a dusty garage. I cleaned it up and I think it enjoys being back on the road. I certainly enjoy riding it.

I also built up a nice UniVega frame at the Bicycle Kitchen. This was a first time thing for me. Prior to this, my only experience was reviving or repairing but never starting from scratch. The Kitchen was great and I love riding the UniVega.

And so, as I survey the remainder of the year, I have to admit that the most annoying aspect of my challenge has been the pesky miles-to-kilometers conversion. Grrrr! With so many kilometers under my belt and with so much of Los Angeles yet unexplored, I’m going to give up the Kilometer challenge and up the ante to a Mileage challenge.

See you on the Streets! 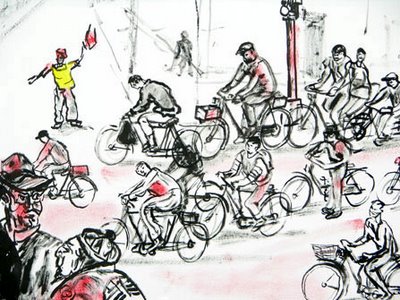 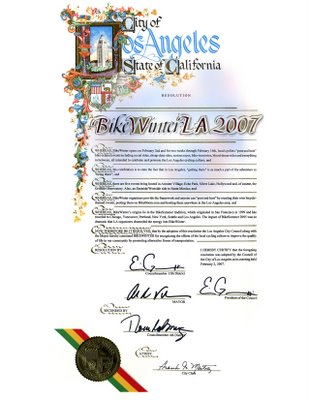