CityWatchLA - Officers Defy Order from Council, Board and Chief 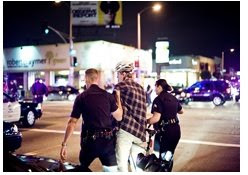 Failure to Communicate?
By Stephen Box

Cyclists on a Saturday night bike ride through mid-city Los Angeles incurred the wrath of the LAPD and ended up detained, handcuffed and cited for infractions that included riding a bicycle without a bike license and carrying a driver’s license with an out of date address.

According to LAPD Information Officer Anna Aguirre, the incident began when they received a call of "assault with a deadly weapon" at 3rd and La Brea. Officers responding to the call encountered approximately 100 cyclists in the Ralphs parking lot and called for "all available units." The deadly weapon turned out to be a motor vehicle and the victim turned out to be a cyclist. LAPD officers interviewed the motorist and the cyclist and determined that no crime had been committed and allowed the motorist to leave. At the same time, supporting LAPD officers and their supervisor began detaining arriving cyclists still in the street, handcuffing them and ultimately issuing the tickets that critics hold up as evidence of harassment.

Bratton goes so far as to say "Given our continued efforts to deploy all available sworn personnel to field operations in direct support of our crime fighting and community policing efforts, reviving the bicycle licensing program at this time is not prudent."

None of which seemed to matter to the Officers who now had several cyclists in handcuffs and were busy cutting the backpack off the back of a cuffed detainee as he lay facedown across the trunk of a police car. A cyclist on the other side of the intersection secured his bike and began photographing the incident on foot from different vantage points. He then crossed the street, earning a pair of cuffs and a ticket for crossing "against a circular red," a violation typically reserved for motorists, not pedestrians.

The photographer, bike activist Alex Thompson, took his photos and his ticket to the Police Commission this past Tuesday and leveled a charge that the responding LAPD officers detained cyclists in handcuffs and then stretched their imaginations to come up with citable offenses, all without probable cause. The Commission immediately turned the case over to the Inspector General.

As of this past Wednesday, Captain Davis, Commanding Officer for the Wilshire Area, has released a statement that indicates in part " With regards to the citations for no Bike License, the "No License" section has been canceled. And, in the spirit of the law the entire citation for the two violators will be canceled. The policy for the moratorium on bike licenses has been discussed with my command. This is a lesson learned, your cooperation and understanding on this matter is appreciated."

Critics of the incident claim that canceling the tickets fails to answer some significant questions including 1) on a Saturday night in LA, is it really a priority to herd cyclists off the street? 2) how does a City Council, Police Commission and Police Chief directive calling for a moratorium on the bike license law get missed by so many LAPD officers and supervisors? 3) why are the responding officers working so hard to find infractions that they will handcuff a cyclist and spend 15-20 minutes looking up obscure and unenforceable code?

The LAPD's position, according to Watch Commander Sgt. Pickett and Information Officer Aguirre, is that the LAPD received reports of traffic violations, alcohol use and other violations by the cyclists on the street that night and that they were just responding to complaints. Cyclists countered this claim by challenging the LAPD to cite those who violate the law, not simply anyone riding a bike.

As for the charge that the handcuffing of the detainees was an extreme and unnecessary tactic, apparently it's the Officer's discretion to use handcuffs "to maintain safety and control." Unfortunately, no records are kept so there is no way of analyzing or evaluating the use of restraints by officers, by area, by incident or any other criteria.

As for the missed memo, a couple of questions: If an order from the City Council, Police Commission and the Police Chief can be missed/ignored by LAPD officers in the field what will it take to get their attention. And, maybe a reissue of Chief Bratton’s comment about devoting manpower to cuffing cyclists with the need to fight real crime is in order. You think? (Stephen Box in a transportation and cyclist advocate and writes for CityWatch. He can be reached at Stephen@thirdeyecreative.net)

Posted by SoapBoxLA at 12:41 AM No comments: 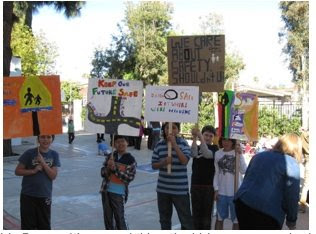 Pulling a play from Saul Alinsky's "Rules for Radicals," the students in the Hollywood Schoolhouse's Leadership Class successfully used the threat of a student march down Fountain Avenue to Councilman LaBonge's office, at first getting his attention, then getting his support and finally getting a promise of a four-way stop sign at the intersection of Fountain and McCadden. Not only that, it came with the assurance from LADOT Assistant John Fisher that it would be installed within two weeks.

The best part is, the march never took place. At first rescheduled and then finally cancelled, the students instead held a Thursday afternoon rally on their playground and hosted parents and LaBonge. It's a good thing the kids never marched because the sidewalk from the school to the Hollywood Constituency Center is narrow, uneven and broken. Add the uncrossable streets and the intense traffic and the route was hardly suitable for a protest march.

Of course, that's the point. Fountain Avenue is hardly an appropriate route for pedestrians. Yet that's the route the kids take every day when they walk from the school to their educational garden several blocks away. All on 3rd world sidewalks, past the neighborhood liquor store and alongside the traffic that weekly sends a car careening onto the sidewalk, into a fence or across somebody's front yard.

Debbie Wehbe, President of the Central Hollywood Neighborhood Council, reports "the area is simply not safe for pedestrians, not just because the intersection is dangerous to cross but because the cars speed around each other, causing collisions that occur on a regular basis." Wehbe pointed out the scarred fence, the skid marks and the narrow sidewalks that bear witness to the vulnerability of the pedestrians who dare to walk alongside the heavy traffic. "The last accident had a motorist racing at 45 mph from one stop sign to the next stop. It's madness!"

Brent Becker, a parent who has been involved with the school for 9 years reports that there was some opposition to the 4 way stop signs but countered "It won't slow down traffic, it's already at capacity. It will simply make it safer for our kids to cross the street."

Stephen Bloodworth, Head of School, was proud of his students explaining "Our school has a long history of civic engagement and in the tradition of its founders, we offered the students in the Middle School Leadership Elective class the opportunity to select a project. They organized themselves around the public safety initiative and selected the intersection of Fountain and McCadden for the focus. They wrote the speeches you heard today, they made the signs you saw today and they wrote the letters that drew the attention of our Councilman, all of which culminated in this victory for everybody."

Bloodworth was beaming as he surveyed the his students and declared "This is a great civics lesson that furthers our mission and makes it safer for our kids to go to school."

As for the intersection improvements at Fountain and McCadden, LaBonge was careful to point out that the stop signs would not be supported by crosswalks, explaining "Our studies show that there are more injuries to pedestrians when there is a crosswalk than when there is no crosswalk. You see, crosswalks give pedestrians a false sense of security." (Stephen Box is a transportation activist and writes for CityWatch. He can be reached at Stephen@ThirdEyeCreative.net)

Posted by SoapBoxLA at 12:14 AM No comments:

CityWatchLA - The Little Campaign that Could

How NO on Measure B Prevailed
By Stephen Box

Dismissed by the opposition as “Fringe Activists” and fighting an uphill battle against a well-financed, well-organized, political machine operating with significant City Hall support, the VoteNoMeasureB campaign came together and used the latest in social media tools to deny Measure B the victory its supporters anticipated. With no money and up against a deadline, the VoteNoMeasureB campaign crafted a plan that used Twitter, Facebook, a Google Calendar, YouTube, email Signature files and a PayPal account, all to get the message out, connect people and drive traffic to a website that hosted the collection of endorsements that simply rolled in.

Up against a barrage of expensive commercials, the VoteNoMeasureB campaign used YouTube videos that were spread virally to deliver the message.

Facing well-paid speakers supported by the DWP’s traveling road show, the VoteNoMeasureB campaign created a Speakers Bureau which hit more than 80 events in the month of February alone, engaging in discussions, dialogues and debates.

Standing up to a measure driven by Mayor Antonio Villaraigosa and City Council President Eric Garcetti, the VoteNoMeasureB campaign went wide and picked up endorsements from the Republican Party, the Democratic Party, the Libertarian Party and the Green Party. Complementing this was the Union support of 15 of the 17 trades working in Los Angeles. Endorsements also came from Chambers of Commerce and 39 Neighborhood Councils issued resolutions opposing Measure B.

All of this with no money and little time!

In hindsight, that may have been a blessing. The seeds of desperation blossomed into innovation that harnessed together the many talents of the ragtag group of community activists who were willing to take a stand.

A newspaperman, a businessman and a bike activist walk into a campaign…

What should be the setup for a bad joke turned out to be the David vs. Goliath story with a punch line that rocked City Hall and demonstrated clearly that the will of the people can’t be ignored.

This simple campaign demonstrated the power to be found when the many skills of people from throughout LA are brought together and armed with a message and a mechanism for communicating that message.

Everyone has a network of influence and everyone has a passion. When those two potent elements are combined and brought with others together under one umbrella, it creates an unstoppable force.

The names of the people involved in the VoteNoMeasureB campaign are many, but if you’re interested in meeting them and getting involved, you’ll find them at Saturday’s Los Angeles Neighborhood Council Coalition meeting followed by the Saving LA Project meeting. (Stephen Box is a CityWatch contributor. He can be reached at Stephen@ThirdEyeCreative.netThis email address is being protected from spam bots, you need Javascript enabled to view it )

Posted by SoapBoxLA at 8:51 PM No comments: