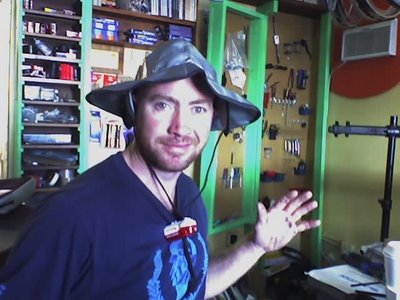 LOS ANGELES, CA – On Friday night Jim C, proprietor of Orange20 Bikes and a Bicycle Kitchen cook, was hit by a car and severely injured as he rode his bike on Franklin Avenue in Los Feliz.

Jim went down hard sustaining injuries that include broken ribs, a cracked vertebrae, a punctured lung and some internal bruising and bleeding.

TJ, Jim’s business partner, expressed confidence that Jim will recover but says that it will take some time and that Jim is currently required to stay in the hospital for observation because of the significant internal injuries.

As of Monday morning, neither LAPD Northeast nor LAPD Central Traffic could even confirm that there was a motorist/cyclist collision on Franklin this past Friday night.

This lack of information illustrates the inequity cyclists experience when riding on the streets of Los Angeles.

When a motorist hits another motorist, two insurance companies go to work. They know the drill, they pull traffic reports, initiate investigations, offer the injured parties support and they advocate on behalf of their clients.

When a motorist hits a cyclist, the cyclist goes down, hard! The cyclist is left to navigate a system that is at best obtuse and does little to encourage or support a cyclist as they fight for appropriate medical and legal attention.

There are two things cyclists can and should do.

The first is to reach out to Jim and offer encouragement and support.

Visit him at the hospital. (take a healthy treat or two for the nurses and thank them for taking care of yet another grumpy, sore cyclist) Jim is in County Hospital, room 10820, and the visiting hours are from 11am to 8 pm.

Drop by Orange20 and relay the message through TJ. (extend the Capitalist Get-Well Greeting and make a purchase, thereby contributing to Jim C’s economic health)

The second is to use your phone. Call Councilmember Tom LaBonge at 213-473-7004 and advocate for Equal Access for cyclists.

Identify yourself as a cyclist and let Tom know that you consider safe access and mobility to be a basic Civil Right and that you expect the full support of the Police Department providing a safe environment for all modes of travel.

Posted by SoapBoxLA at 12:07 AM No comments: 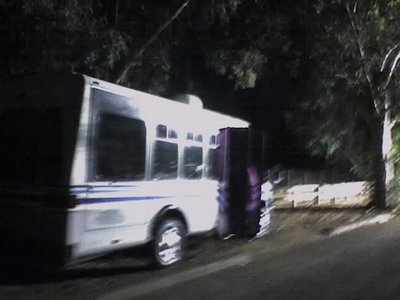 A moderately sized shuttle NOT used by Rec & Park(ing)
GRIFFITH PARK, CA – Locals celebrated when the Department of Recreation and Park(ing) announced that they were going to ban automobiles from the Griffith Observatory and instead use shuttles to move people up and down Mt. Hollywood.

In hindsight, the public erred in assuming that a Rec & Park(ing) commitment to shuttles was synonymous with a commitment to moderation, sustainable technology, traffic mitigation, noise reduction and other purported benefits of the shuttle access plan.

Instead, Rec and Park(ing) demonstrated a completely cavalier attitude to the delicate balance of nature as it took the largest buses available (the 18-wheelers used to move cattle were not available on such short notice) and lined them up with engines idling, filling our urban paradise with a noxious reminder that when given a small piece of rope, Rec & Park(ing) will find a way to flog the community. 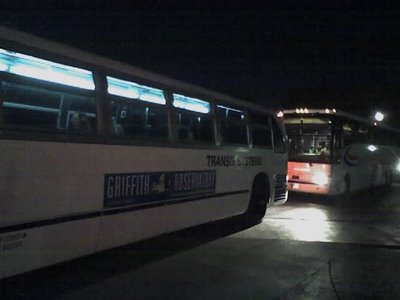 Large shuttle buses wreaking havoc on the environment
When asked why the buses were always idling one driver responded that it was to ensure that the air conditioning could continue to run.

Another driver confided to SoapBoxLA that the motivation for leaving the buses idling was that they didn’t consistently start and that a stalled bus would mess up the schedule. 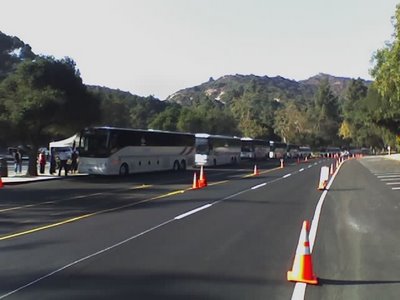 SoapBoxLA watched the buses both arrive and depart, some full and some with as few as 6 passengers.

How long will it be before we ditch the tour buses, ransack the LACity motor pool, pull out a couple of dozen Council Deputy hybrids, load them up like Eastern Bloc taxis and send them up the hill?

The shuttle concept is a good idea. Cough. It is just in the wrong hands. Speak up. Call Tom LaBonge at 213.485.3337 and ask him to put people first. Cough. Ask him to join you for a ride. 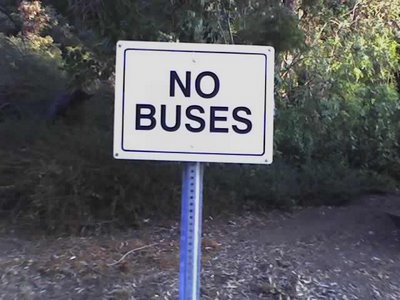 Posted by SoapBoxLA at 6:22 PM No comments:

The Birth of a Great Idea! 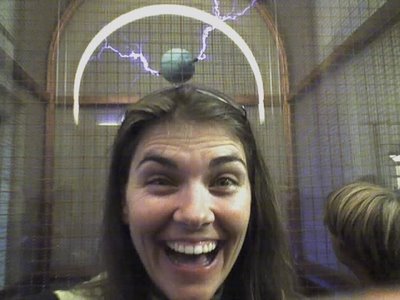 LOS ANGELES, CA – “Hey, let’s hook up with SurviveLA and ride our bikes to the Museum of Jurassic Technology!”

Posted by SoapBoxLA at 5:36 PM No comments: 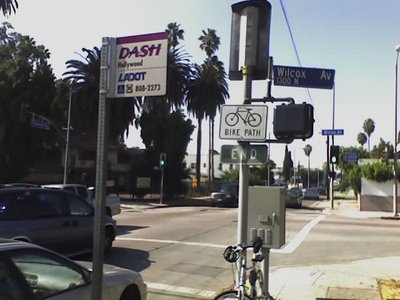 HOLLYWOOD, CA – On Fountain Avenue, right in front of the Hollywood Field Office for the City of Los Angeles, sits the World’s shortest bike path.

It has no beginning, it only has an end. It literally exists only at the point at which it ceases to exist.

As SoapBoxLA prepares to pick up the phone and call the LADOT Bikeways Department the words of a well-meaning but so-far-off-base leader of a local cycling advocacy group come to mind.

“It’s better than what we had before and if you complain they might just take it all away.”

How sad! To think that some cyclists might tolerate Transportation Malpractice because they think bad service is better than none at all.

Whoof! With a shake of the head SoapBoxLA picks up the phone…(this is a group activity, pick up your phone) dials 323-845-9835 and tells Jeannie L. Shen of the Hollywood-Wilshire District of the LADOT that we can’t find the beginning of the Fountain Bike Path.

Thank Jeannie for her good, hard work and invite her to go on a ride.

"Take care to get what you like or you will be forced to like what you get." - George Bernard Shaw 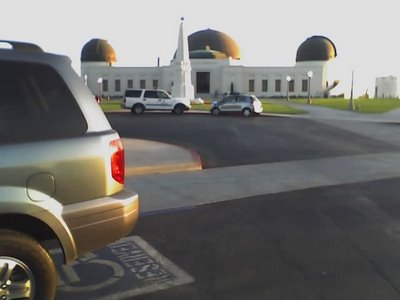 MT. HOLLYWOOD, CA – Toyota parks display cars (2) in front of the Griffith Observatory in a sad display of “We don’t get the whole car-free concept!”


The two display automobiles are parked at the red curb in front of the Observatory. This is as close to the Observatory as one can get without leaving the parking lot.

Meanwhile bicycle parking is relegated to the area behind the rest rooms in the same parking lot but in the opposite direction.

LA Muni Code requires bicycle parking to be placed as close as the closest parking space for automobiles. There are two areas, to the east and west, that are close, visible, open to the eyes of the public, safe, and do not interfere with the movement of pedestrians. These would be an ideal location for bicycle parking.

And yet, the Department of Recreation and Park(ing) placed the Marquis de Sade bike rack behind the dumpster area and behind the bathrooms. 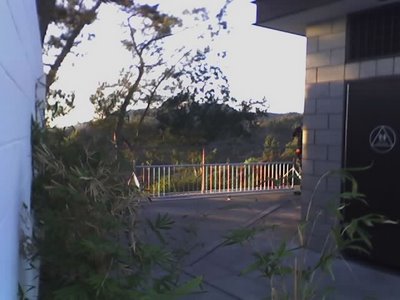 The Griffith Observatory exists today because many years ago, Colonel Griffith J. Griffith stood on top of Mt. Wilson and gazed through a telescope at the night sky. He was so moved by the experience that he decided then that everyone should have the opportunity to experience the place of humanity in the vastness of space and time.

The Colonel came down from Mt. Wilson and said “Man’s sense of values ought to be revised.”

SoapBoxLA looks at the Toyota sponsored displays in front of the Observatory and agrees with the Colonel, adding “Now, more than ever!” 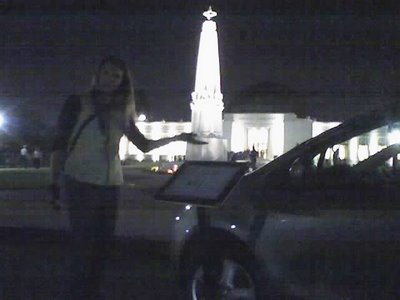 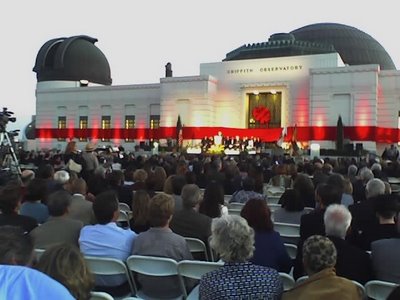 MT. HOLLYWOOD, CA – The Griffith Observatory celebrated its reopening with a ribbon cutting ceremony that served as a literal salt-lick for politicians and power. The Feds were represented as was the U.S. Military, NASA, our State Government, our County Government, our City Government, our Retired Government and even some local cyclists.

Mayor Riordan greeted SoapBoxLA by asking “Did you ride your bike up the hill?” to which SoapBoxLA proudly replied “Yes I did!” 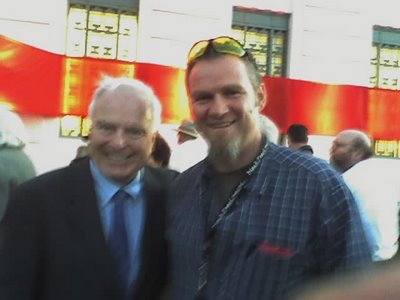 The ride to the Observatory for the Ribbon Cutting was especially gratifying in light of the long and contentious battle to include cyclists and hikers in the access plan.

While the battle for EQUAL ACCESS continues, Mayor Riordan’s question serves as a reminder that when it’s all said and done, the most important question is;

“Did you ride your bike?”

For all the letters, emails, phone calls, meetings, hallway lobbying and elevator speeches, the most significant action the cycling community can take is to ride, ride some more and then keep riding.

Posted by SoapBoxLA at 1:09 PM No comments: