Bike Instead of Work Day Recap 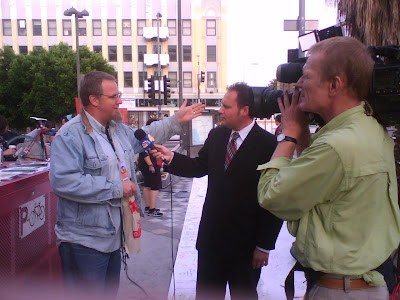 Bike to Work Day is an annual event sponsored by the Metro and designed to promote cycling as an option for commuting to work.

Bike to Work Day, as celebrated in Los Angeles, is intended to encourage neophyte cyclists by drawing them into the cycling community and rewarding them with gifts and encouragement.

For the 2nd year in a row the large number of cyclists who spent the entire day riding their bikes around LA served to demonstrate that in addition to getting more people on the bike, LA needs more work for those cyclists.

As large employers served up early morning snacks to their hardy bike commuters and then hustled them into their cubicles, the Bike Instead of Work crew milled about the Hollywood & Western Metro Station munching on bagels and watching the world wake up. 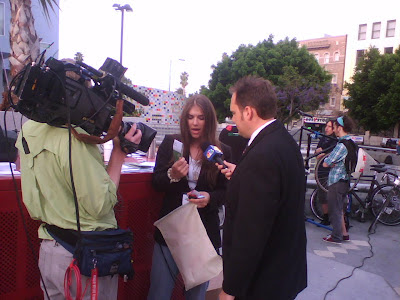 The day started at 5am for Stephen and Enci as they met up with John Cádiz Klemack of NBC 4 for a couple of hours of "look what's happening on the streets of Hollywood" interviews. John and his crew hung out and gave the Cyclists' Bill of Rights a bit of attention.

Chris Kelly of Hollywood Pro Bikes provided bagels and bike tune-ups, a regular feature at his shop. (not the tune-ups, the bagels!) The tricksters in the crowd performed skids, trackstands and rode countless circles in reverse while the activists extolled the virtues of the Cyclists' Bill of Rights, quickly filling a 50 feet scroll with signatures of support.

Through it all, the growing crowd howled at the cyclists who rode by "One of us! One of us!" Cyclists who dared to stop for the swag bag and a bagel were challenged by the employment-impaired to "Ride with Us!" and "Bike Instead of Work!"

Cyclists came from the four corners with the San Fernando Valley represented along with San Pedro, NELA and the Inland Empire. Some came from other rides and had been up all night, some came from Brass Knuckles' slumber party and some were there for their first group ride. 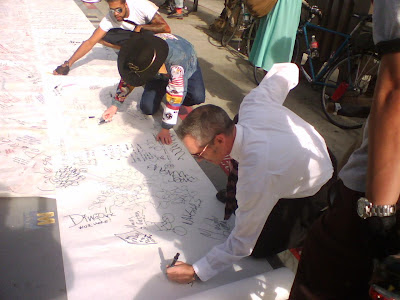 Mitch O'Farrell and Helen Leung from City Council President Eric Garcetti's office (also on the corner of H'wood & Western) joined us and took a few moments to address the herd and sign the Cyclists' Bill of Rights.

As Mitch and Helen left to go run the city, the Bike Instead of Work crew slowly mounted up and rolled down Hollywood Blvd. picking up a few more cyclists as they headed through Silver Lake and Echo Park.

SiteLA had coffee and tamales on the sidewalk and Randy passed the hat, raising $100 for her ALC Aids ride campaign. Fortified and energized and ready to "not work" the group headed off to City Hall.

The route went down Sunset Boulevard and onto Park and then through the 2nd Street Tunnel, which was filled with the howls and whistles of cyclists who are most used to group rides that take place during the late night hours.

The streets contained light traffic and the typical response was a light "toot toot" which was accepted as a wee bit of bike love.

The south lawn of City Hall was full with a Farmer's Market and the cyclists took three or four laps around the block to fully announce their presence to the Farmer's Market crowd. A few howls at the waning moon, a few jeers at the Mayor for failing to support Bike Instead of Work Day and the steps were occupied for the traditional "Bike Lift" and the cyclists were off...all the way across the street to the Caltrans building.

Numbering about 50 at this point, cyclists rode the ramp onto the Eli Broad Plaza, the Thomas Mayne designed "public space" that fronts 100 Main, and the fun began.

As Annie, Mikey, and Stephen rode in reverse circles, security rushed to the Plaza and an announcement was made instructing the cyclists to walk their bikes. The irony of the request was lost on those who were obviously not used to seeing the Plaza filled with cyclists and who were distressed to see the open space filled with humanity and expressions of bike skills. 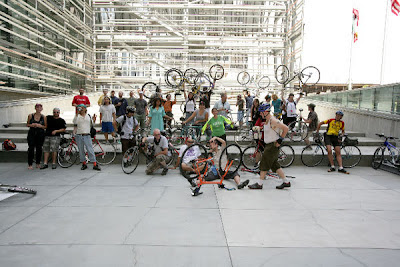 CalTrans Photo by T. Ritter
Traffic Jam, a band made up of Caltrans employees was setting up for a lunch time performance and Dale Benson and Keith Sellers were hosting a Bike to Work pit stop under "Motordom," the largest public art installation in the City of Los Angeles.

As the band played Queen's "Bicycle" MikeyWally led the crowd in singing "I want to walk my bicycle!"

By now the Cyclists' Bill of Rights was unfurled and Caltrans Deputy District Director Jim Hammer took the mic to give the cyclists some bike love and then he joined Dale and Keith in signing the Bill of Rights.

Caltrans Chief Deputy Raja Mitwasi missed out on the speechifying but he joined the crowd and made a point of introducing himself and reminding the cyclists of Caltrans' commitment to alternative transportation, especially cycling.

With high noon approaching, Phillipe's called and the Bike Instead of Work ride broke up into the French Dip & Beer crowd and the Los Angeles Neighborhood Initiative crowd.

The LANI cyclists rode off to USC for a free lunch and a panel discussion on cycling in Los Angeles featuring Lynne Goldsmith of the Metro and Erik Knutzen of Homegrown Evolution who gave an inspired call to action. Change the World? Ride your Bike! Nuff said!

(Moment of "bike snubbery" - on the way to USC, one of the Forum presenters rode past us on a bike with none of the obligatory "nod" or "Hey!" let alone the day's "One of Us!" acknowledgments. Then to find out that the "bike snub" came from the cycling community's "representative?" Then...the same person gave the cyclists at the forum the "you need to get more involved!" lecture. All from someone who can't even say "Hi!")

Down to a dozen, fed and watered, loaded down with swag and feeling the sun, the group headed back to Hollywood, losing Urban Hippie and Rhombeo along the way who used their library cards to take advantage of some free time in the USC swimming pool. Urban Hippie recounts her day complete with cannonballs at USC and celebratory libations in Echo Park.

It was a great day, way long and full of bike love. It was great to make new friends, see old friends and to celebrate Bike Day, part of Bike Week, in Bike Month, all of which is part of BIKE LIFE.

Email ThisBlogThis!Share to TwitterShare to FacebookShare to Pinterest
Labels: bike instead of work, bike to work, caltrans, cyclists' bill of rights 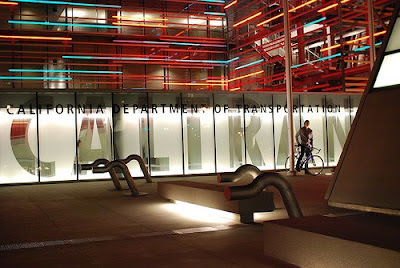 Photo by digablesoul via Flickr
It's time again for the Caltrans District 7 Bicycle Advisory Committee and Enci and I are busy preparing the Cyclists' Bill of Rights, along with a small diatribe on Transportation as a Civil Right, all for presentation tomorrow.

We have been participating with the Caltrans BAC since its inception a couple of years ago.

We were at first a little surprised when we received an invitation from Dale Benson to join the nascent BAC because we thought of Caltrans as the department which poured cement, lots of cement, all in an effort to move motor vehicles, lots of them and as fast as possible.

It turns out that they do pour cement, 4000 miles of freeway worth of cement, but that cyclists are allowed to ride that cement unless prohibited. This means that over 1000 miles of freeway are open to cyclists. (see freeway ride for the other 3000 miles)

Enci and I gave it a shot and rode the 101 north on our way to Santa Barbara and found it to be an exhilarating experience that came with equal parts terror and joy.

All of which is to say our experience with Caltrans has been positive and that they are involved in funding local projects, laying down local standards and setting policy for our community, all driven by a commitment to support pedestrians and cyclists.

Before you get all misty eyed, keep in mind that the BAC meets in a building that celebrates the Caltrans relationship to the motor vehicle with Motordom, the largest public art installation in the City of Los Angeles. At four stories tall, Motordom (Keith Sonnier '04) uses neon and argon to dramatically recreate the lights found on the freeway at night.

As you can see in Al's photo, it all looks even better positioned appropriately behind a cyclist. Now that's beautiful!

This past Thursday, on Bike Instead of Work Day, about 50 cyclists dropped by the 100 Main Street Plaza to visit Dale Benson and Keith Sellars, two of our cycling buddies and the Caltrans hosts for Bike to Work Day.

We unrolled the Cyclists' Bill of Rights and we were able to pick up a few endorsement on the ride. 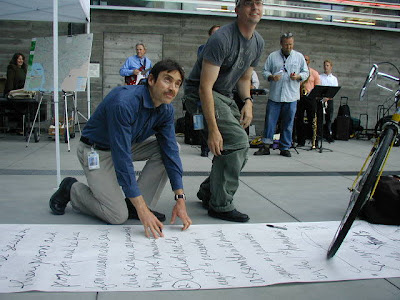 Dale Benson and Keith Sellers were our gracious hosts. 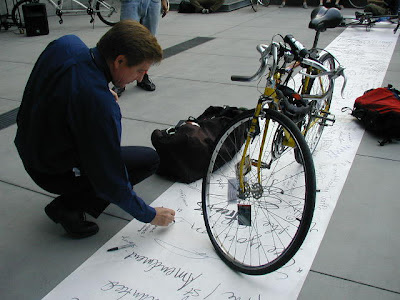 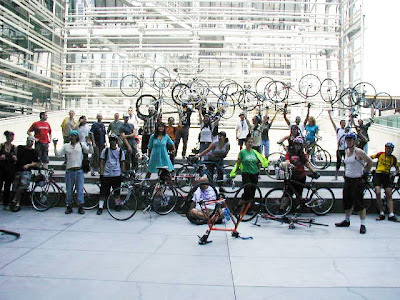 Hollywood & Western, Sunset Blvd, City Hall and now the Caltrans Plaza...the crew finally fragmented into those who had to work, those who swore allegiance to Phillipe's and those who headed off to USC for the Bicycle Movement element of the Los Angeles Neighborhood Initiative Forum, presented by our friends Erik Knutzen and Lynne Goldsmith. 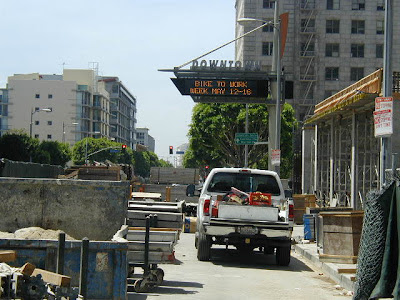 And this is our reality! No, really, ride anywhere! It's Bike Life!

Posted by SoapBoxLA at 12:45 AM No comments: