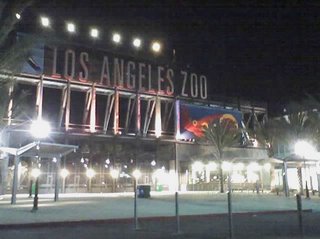 The meetings are monthly, open to the public, somewhat contentious and consistently long with public comment coming at the end of a typically long evening.

The August meeting was a little different, featuring guest speakers from the Autry National Center and from the Los Angeles Zoo. Both facilities are Griffith Park “tenants.”

John Gray, President and CEO of the Autry, was braced for confrontation and came with quite an entourage, all as a result of the controversy over the assimilation of the Southwest Museum and its assets into the Autry family.

(I took the liberty of pointing out that their bike racks are antiquated and that if they were to call Michelle Mowery, Bikeways Coordinator for the Department of Transportation, (213-972-4962) the city might provide new and effective bike racks!)

I urge readers to call John Gray (323-667-2000) to thank him for providing access to the Autry rest rooms and to encourage him to provide appropriate and effective bicycle parking at the Griffith Park Campus of the Autry National Center.

John Lewis, General Manager of the Los Angeles Zoo, was next to present and his vision for the LA Zoo was captivating and exciting. This is not to say that it was without conflict.

Plans call for a 17 million dollar parking lot replacement, tapping into Prop “O” money. I pointed out that Rec and Parks has gone on record as saying that 10 million dollars for shuttle service throughout the park is cost prohibitive. How then would investing in the future of free parking with a price tag of 17 million be a reasonable advantage?

Before I could yell “Free the Elephants, not the Parking Lot!” John had moved on and was discussing the attractions.

After the presentation I spoke to John about the huge illuminated LA Zoo sign (situated in the middle of an urban wilderness, adjacent to the Observatory, illuminated only after the zoo has closed!) and the lack of appropriate bicycle parking.

John was quite amenable and took copious notes. I was pleased to note (see pic) that the simplest of the requests (turn off the sign) was handled immediately.

Again I urge readers to pick up the phone, this time to call John Lewis (323-644-4200) to thank him for turning down the lights and to encourage him to provide appropriate and effective bicycle parking at the Los Angeles Zoo. 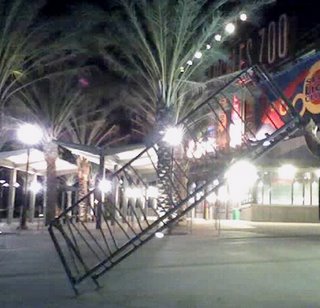