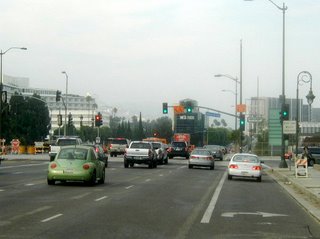 LOS ANGELES, CA. – The Santa Monica Boulevard Transit Parkway is the largest roadway project in the City of Los Angeles. Only 4 Kilometers in length, the Parkway is not very long, but with 3 lanes of travel in each direction, frontage roads on either side and ingress and egress points throughout, it’s obvious that the designers were serious about moving some automobiles rapidly through this neighborhood.

The Parkway runs east-west on Santa Monica Boulevard from the border of Beverly Hills (Moreno Drive) on the east side to the 405 Freeway (Beloit Avenue) on the west side.

These heavyweight project partners threw down $75 million fully intending to address the 2nd most congested corridor in the City of Los Angeles by encouraging multi-modal travel by featuring walkways, bike paths, and enhanced bus transit operations.

Locals complain that the pedestrian opportunities look minimal, the enhanced bus operations look like bus pads on any other busy boulevard, the bike paths have been replaced by bike lanes using a 2002 striping plan that does not incorporate any of the recent State of California adopted design standards.

When asked to evaluate the project, Jim Bursch of West L.A. Online replied “We just want the construction to end!”

With the conclusion of construction in sight, the current tab is at $90 million. Intersection cement is being poured, the landscaping is nearing completion, and once the final surface is set the striping will go down and we are off to the races!

There have been many concerns raised by the community along this journey and one significant issue still remains on the table. This is the final striping plan.

The Parkway is designed to move cars. One might suggest that the design includes elements of “Frogger” with the cyclists playing the Frog.

Vehicle Code requires that cyclists use a bike lane when one exists (with exceptions for debris, safety and left turns) and SMBTP has plans for a 5’ (including 2’ gutter pan) Bike Lane. Concerns have been raised that this will result in “engineered conflict” because of the freeway style egress lanes that take autos across the bike lanes at full speed.

Who has right-of-way? An auto in a lane that is engineered to encourage a veering exit with no reduction in speed until safely on the frontage road or a bicycle in the bike lane desiring to maintain a straight through line? The striping plan on the table at the last community meeting had no signage or lane markings in the intersections that would clarify any right-of-way conflict. 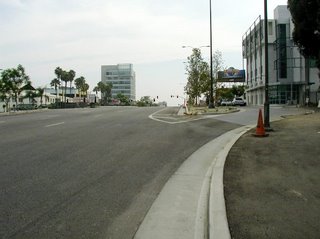 While many concerns have been raised regarding landscaping and visibility between the main boulevard and the frontage roads, conflicts with bus cutouts, ingress and egress traffic, the greatest concern raised has been “Who’s watching out for the cyclist?”

There is little time left to act and our actions will have long term ramifications.

Call City Council President Pro Tem Wendy Gruel (CD2), who chairs the Transportation Committee, and ask her if the largest Roadway Project in the City has been reviewed by the Committee. (213-473-7002) Call her legislative deputies, Christopher Olsen and Jennifer Cohen, and ask them if Wendy’s office can vouch for the efficacy and safety of the Santa Monica Boulevard Transit Parkway bike lanes. 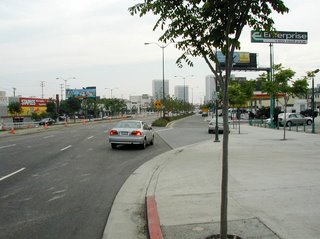 Call City Councilmember Jack Weiss (CD5), whose district includes the Parkway, (213-473-7005) and ask him if he is confident that the bike lane striping plan contains the most recent approved signs, signals, and pavement markings for the State of California and the City of Los Angeles. Call his Senior Field Deputy Paul Backstrom (310-289-0353) and ask him if the autos using the egress are in conflict with the bicycles in the bike lane.

Call Gloria Jeff, the General Manager of the Department of Transportation, (213-972-8480) and ask her if the Santa Monica Boulevard Transit Parkway incorporates all the design elements necessary to ensure safe travel for cyclists. Ask Gloria if the LADOT Bikeways department participated in the process and if the final result includes all of their recommendations for cycling safety.

Call Michelle Mowery of the LADOT Bikeways Department (213-972-4962) and ask her if the recommendations of the Los Angeles Bicycle Advisory Committee have been incorporated into the final striping plan.

But most of all, ride the Santa Monica Boulevard Transit Parkway. Ask yourself “Is this what a $90 million Parkway looks like from a cyclist’s perspective?”

If it is, then enjoy your ride!

"Clowns to the left of me, Egress to the right;
Stuck in the bikelane again..."
Posted by SoapBoxLA at 6:49 PM