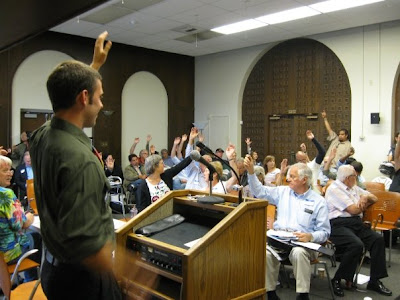 The LA Bike Working Group, made up of cyclists from around the city, is meeting this Saturday in East Hollywood to develop grassroots recommendations for the LA's Draft Bike Plan, an element of the Transportation Plan which is part of the City's General Plan.

The hard charge here is that in many cases, the Draft Bike Plan has actually removed bikeways amenities from the plan, resulting in a retreat rather than an advancement, which makes one wonder why it takes a $450K plan in order to do less, rather than more.

The controversy over the Draft Bike Plan has been documented at CityWatchLA [LINK] on LA.Streetsblog again on LA.StreetsBlog and on WestsideBikeside BikeGirlBlog and on SoapBoxLA

The cycling community is asking for support in developing a powerful visionary document that will begin with "Consider all streets as streets that cyclists will ride." and that will continue with real language of imperative rather than simple suggestions and hopes and wishes. This plan, like all plans, belongs to the people of Los Angeles and it must be a plan that reflects the wishes of the community.

It must be an improvement, it must integrate with the other plans that cover the community and it must have teeth.
●●●
As for the other topics covered at the NC Action Summit those working groups are scheduled as follows:

● As for the 1/2 Off Initiative, the campaign is moving forward and the organizing committee is taking on volunteers and funding. For more information visit Half off Initiative.

(Stephen Box is a transportation and cyclist advocate and writes for CityWatch. He can be reached at Stephe@ThirdEyeCreative.net) ◘

Posted by SoapBoxLA at 1:38 PM