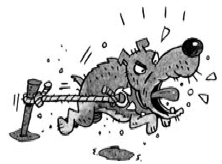 Angelenos in pursuit of oversight reform are in the midst of an "all or nothing" battle that starts with the upcoming opportunity to create of a Ratepayers Advocate (RPA) and establish the Office of Public Accountability. (OPA) But both efforts will be for naught if they are not supported with significant Commission Reform and the establishment of a City Prosecutor.

It was increasing public outrage over LA's Department of Water & Power cavalier behavior that stirred a grass roots battle to establish a Ratepayers Advocate (RPA) with oversight authority in order to ensure open review of the DWP's operations, finances, and management.

Through it all, public distrust of what Jack Humpreville refers to as "the DWP’s politically appointed Board of Commissioners, its overly politicized and less than candid executive management, and the Mayor and his evasive staff" continued to grow.

It was an internecine struggle over LA's budget crisis that led to a family feud between the DWP, the City Council, and the Mayor's Office. The residents of Los Angeles watched and listened to threats of bankruptcy, renewed layoffs, increasing flotsam and jetsam, ongoing cuts to city services, and the impending sale of city assets.

Through it all, public distrust of what Richard Lee Abrams refers to as "lots of emotional hysteria about lost services, but total silence about available funds" left the Mayor and City Council struggling to explain how a large LA deficit matched by a larger CRA surplus still results in a budget deficit that requires a fire sale of city assets.

The resulting groundswell of grassroots support for greater oversight of the DWP, the City's budget process, and the machinations of LA's Commissions and Boards stirred a stampede as the DWP Commission, the City Council, and the Mayor's office all got in the game.

As the deadline for March 8, 2011 ballot measure drew closer, there were competing proposals for a Ratepayers Advocate, an Inspector General, and an Office of Public Accountability. The DWP's union entered the fray, management and commission positions changed hands, and by the time the City Council was done, the proposed ballot measure had been watered down, resulting in reduced authority and narrow jurisdiction.

While the DWP Reform Panel originally called for charter amendments authorizing a well funded, empowered, and truly independent Ratepayers Advocate as well as an Inspector General, the resulting ballot measure no longer include the authorization of City Council to remove the DWP General Manager and any Commissioner with a two-thirds vote. The Office of Public Accountability will be limited to the review of water and power rates and will rely on the City Council and Mayor to pass ordinances to insure the thorough review and analysis of DWP’s $60 billion strategic plan and its operations, finances, and management.

Still, progress is admirable. It is rewarding and it is encouraging. But the establishment of a Ratepayers Advocate supported by the Office of Public Accountability is a hollow and symbolic gesture unless they are supported by subsequent ballot measures that reform the Commission process and establish a City Prosecutor.

Municipal authorities typically address this situation by having two separate offices. The County of Los Angeles has the District Attorney who owes no duty to the County Board of Supervisors while the County Counsel serves the Board and the Supervisors themselves.

The City Charter would need to clarify jurisdiction of the City Prosecutor and provide for felony investigations that involve the City of Los Angeles. Cities, counties, states and the feds can have concurrent jurisdiction, thus allowing the City Prosecutor to investigate and/or prosecute cases which involve or may involve the City, a City agency, or a City official. This must take place without divesting felony jurisdiction from the District Attorney or the State Attorney General.

As the March 8, 2011 election approaches and the ballot measure establishing a Ratepayers Advocate (RPA) and an Office of Public Accountability (OPA) get the spotlight, it is important to remember that oversight and accountability mean little, if anything at all, without enforcement authority and a mandate for prosecution.

2010 was a great year for the grassroots advocates who fought so hard to bring the issues of open and transparent governance into the marketplace of ideas. Progress was made but the impending success will be hollow if we do not continue the journey.

2011 is the year in which we can work together to move forward from awareness and into the arena of performance and accountability, supported by a City Prosecutor that has the budget, the professional expertise, the legal clout and the mandate to do a meaningful job.

(Stephen Box is a grassroots advocate and writes for CityWatch. He can be reached at: Stephen@thirdeyecreative.net. Disclosure: Box is also a candidate for 4th District Councilman.)