LA’s City Hall: Too Many Departments, Not Enough Light Bulbs 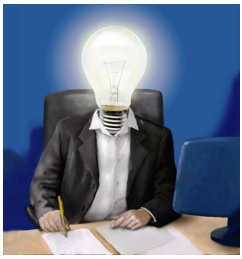 RETHINKING LA - Austin Beutner, while still stumping the Mayoral campaign trail, told a story of how many City of LA Departments it took to change a light bulb. In this case a light bulb on a light pole.

Apparently it takes the Department of Water and Power because they control the electricity to the bulb. It also takes the Bureau of Street Services because they are responsible for the actual street and sidewalk that hosts the light pole. Add to the mix the Department of Transportation because they are responsible for controlling traffic as the heavy equipment blocks the street. Rounding out the effort is the Bureau of Street Lighting, the folks who actually install the light bulb.

If the light bulb is being replaced as the result of a motor vehicle collision, a fairly common occurrence in Los Angeles, the Los Angeles Police Department may end up investigating a traffic collision that will then require the Bureau of Sanitation to send a team to clean up the debris in the street.

Beutner made much of this multi-departmental dance that demonstrates LA’s commitment to maintaining siloed departments that have their own language, their own communication style, their own rules, and their own authority. Heck, some of them have their own police force.

When Beutner told his story, it drew chuckles. After all, it’s a light bulb joke!

But when it happens to people who live in Los Angeles and who expect the City of LA to efficiently deliver City Services to the people of LA, it is no longer a joke. It is a crisis.

Recently, a resident of an R-1 home engaged in a bit of Spring Cleaning and found himself with a big load of trash that would not fit in the single black trash bin given to him by the Bureau of Sanitation and picked up on a weekly basis. So, he did what works.

The resident made several trips across the street to deposit the loose trash on the sidewalk outside the local church. Why? Because if he called Sanitation, they would charge him for an extra bin as a long term solution or for the additional trash if he wanted a one-time extra pickup.

Instead, the resident engaged in a misdemeanor act of “illegal dumping” that carries with it a first-time penalty of $500. This misdemeanor doesn’t have to be witnessed by a law enforcement officer, and in this case, it didn’t take much to determine guilt. Items with the resident’s name and address were found in the trash as well as his ID card and then he confessed, twice, to the illegal dumping.

Here is where the City of LA’s multi-departmental approach to changing light bulbs, or in this case, taking out the trash, gets convoluted and ultimately fails the people of Los Angeles.

The pastor of the church sees the trash and calls 311. He also sends an email that alerts the City Council office to the ongoing problem on this street and activates neighbors who call the Senior Lead Officer of the LAPD.

311 is supposed to be the “one phone call is all it takes” solution to the byzantine morass that is the City of LA but the reduced hours of operation, the long hold time when a call is placed, and the slim chances that the call will activate the correct department are all evidence that 311 is not a solution.

The 311 operator took the call and sent the Bureau of Sanitation to clean up the illegal dumping mess. A neighbor had already pulled the identifying elements from the trash heap and set them aside for the investigators.

After the Bureau of Sanitation cleaned the site, the Bureau of Street Services arrived to conduct an investigation. They have enforcement authority, including citation and arrest, but if they get to the scene after it has been cleaned, it’s tough to investigate or prosecute.

In this case, there was still evidence because the Bureau of Sanitation only took the larger debris, leaving behind the illegal dumper’s identification card from his Law School. (so much for the “I had no idea!” defense)

The plot thickens though because the LAPD’s Senior Lead Officer had already knocked on the illegal dumpers door and accepted the “Sacre Bleu!” defense, allowing the resident to call 311 and demonstrating a disconnect from municipal code and Sanitation charges.

While it is hardly incumbent on a SLO to know the minutiae of LA’s sanitation billing, it is their responsibility to know the laws that impact the quality of life issues that a SLO deals with. In this case, illegal dumping on street where it is a common occurrence would suggest that a SLO with a decade plus of experience might know the difference between an apartment building and a house or bulky items and loose trash.

Further adding to the confusion at the trash heap is the charming habit of the local Councilman to send a truck he has commandeered from the Department of Public Works around the neighborhood, picking up trash and focusing on the symptom of illegal dumping rather than the solution.

Instead of actually running the city and addressing the systemic issues that result in massive budgets that fail to deliver city services, his solution is to send a Council Deputy in sandals out in a City vehicle with a driver to pick up evidence of illegal dumping, further thwarting an effective investigation.

Missing from this heap o’ departments at the trash pile is the City Attorney’s office which has a Neighborhood Prosecutor standing by to address quality of life issues such as the long-term residents who know how to game the system.

Of course, there is not much the Neighborhood Prosecutor can do if the Senior Lead Officer is busy yelling at residents “I don’t know what else I can do!” and “I don’t know why this is such a big deal!”

Added to the failure is the ease with which the Bureau of Street Services Investigator accepted the resident’s story without simply calling 311 to verify the accuracy of their defense. That would have required the investigator to breach the silo walls, talking to a 311 operator and Bureau of Sanitation staff.

The bottom line is this, the City of LA is incapable of addressing an illegal dumping incident, one that is actually part of a pattern of abuse on this same street.

Of the many departments involved here, it is apparent that LA’s City Hall has become the Tower of Babel.

The Bureau of Sanitation is a mysterious entity that requires an insider’s password in order get to those responsible for operations.

The Bureau of Street Services only takes voice messages that are then written down by the receptionist, explaining where those old “Missed Call” message pads were sent.

The City Council office sent instructions that contradict the 311 advice of old and ensure job security for the “Trash Truck” Deputy, calling on residents “in the know” to simply go directly to the Council Office to get trash picked up.

Through it all, the SLO instructs the local to organize cleanups because “As you know it is up to your neighbors and the entire neighborhood to get involved and keep your area clean.”

Meanwhile, the beleaguered 311 operators take calls from harried Angelenos who spend too much time on hold and not enough time seeing results. If 311 is only open when people are busy getting to work, working and getting home from work, it’s safe to say that the system is not meeting people where they need to be met.

If there is a budget crisis in Los Angeles, it is because too many departments are protecting their siloed turf and antiquated communications systems while the residents of LA stand by and wonder why it takes so many departments to change so few light bulbs.
Posted by SoapBoxLA at 1:48 AM

It is anti democratic to ignore candidates who have earned their place to be on the ballot.

In the current political mood and the growing apathy by voters it is imperative that every candidate who is officially on the ballot to be heard by the public.

Ignoring these candidates only reinforces to the voting public that money and not the most qualified candidate is given a chance to run for office with a level playing field.

The deck is stacked against a candidate who is not willing to be swayed by money and political influence. This is a sad day for our Democracy.

The Media and the various organizations who host a candidate forum – debate have a great responsibility to present unbiased information to the public, of all the candidates that appear on the ballot with a level playing field.

To ignore some candidates is a distortion of our Democratic oath and they are practicing the very same unacceptable behavior that they are trying to correct in today’s political scene.

By ignoring candidates who are on the ballot the voters are deprived of critical information and opinions of all the candidates on the ballot. It is a disservice to the community at large.

Angelenos have the right to an open and balanced election process resting on the values of our democracy, which is open to all candidates.

We have to show to the public how real democracy at work – by presenting all the candidates, not just the select few.

The right to vote is the right that protects all other rights. That includes all official candidates.