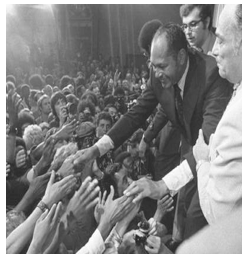 RETHINKING LA - Los Angeles will take its place as a Great City when it shifts from a complaint-driven system to a standards-driven structure, putting the people of LA first and positioning respect as the foundation for developing powerful relationships between the public and those in public service.

This simplistic statement amounts to a proverbial fork in the pothole-laden road for Los Angeles, one where the city can continue to instruct the public to call 311 to report potholes or one where the city develops a standard for its streets and then sets out to bring the streets up to standard.

In more general terms, it would free the public from being responsible for spending inordinate amounts of time requesting the most basic of city services and allow the public to actually partner with City Hall, working together to improve the quality of life in the community.

1) Open the front doors of City Hall to the public. Reward those who take the Metro to the Civic Center station and then walk to City Hall, put out the welcome mat, turn the courtyard into great public space, and send a message to the public that City Hall is their home. City Hall is a beautiful building but asking the public to use the back door is simply unacceptable.

For all of the money being spent on the 12-acre Grant Park that is being built to the west of City Hall, it still connects to doors that are closed to the public.

2) Position a concierge at each entrance and greet the public, offering real information and real answers. Tone down the oppressive security gauntlet, get rid of the stickers, lose the irrelevant sign-in sheet and dispense with all of the unnecessary labor. It's City Hall.

The most significant violence in recent history to occur on city property was committed by city employees so the inconsistent security standard simply positions the public as 2nd class while the staff are 1st class. Open the doors, treat the public with respect, put customer service first and hire those concierges!

3) Listen to the public, not simply as a demonstration of endurance, but as an opportunity to take notes, to engage, to incorporate public comment into the active-solution process. Public comment is not simply a Brown Act obligation, it is the essence of the relationship, it is the minimum standard and any real leader will transcend minimum and look for optimum.

Engage the public, ask for input, make feedback an integral element of moving forward. Anybody who takes a half day of their time to travel to City Hall should be thanked for caring enough to participate, rewarded for the investment of time and enlisted as a partner in making LA a Great City, not simply dismissed as 2 minutes of noise.

4) Instill an "Every door is the right door" policy so that the public never ever has to navigate the Department of "No" journey that fatigues the hardiest and consumes inordinate amounts of energy and time.

From the Mayor to the intern, treat every request as an opportunity to be of service. Find the answer, find the department, find the solution but never, ever send the public away with an admonition that they asked the wrong person or the wrong question or the wrong department. City Hall exists to remove obstacles.

I'm often convinced that there are those in power who think that it would be a lot easier to run the City of Los Angeles if it wasn't for all of the people.

This attitude seems to originate in City Hall and then waft through some of the departments and offices, resulting in staff who seem to think that transportation would be a lot easier to manage if it wasn't for all of the traffic, that social services would be easier to handle if it wasn't for all of the needy people, that emergencies would be easier to address if they would just take place between Monday and Friday.

It's simple to suggest that the City of Los Angeles could take a lesson from Disneyland or Nordstroms or Trader Joe's or Southwest Airlines or Rackspace, companies that put a focus on customer service in good times and then double down when things get rough. But the immediate response tends to be "That's different, we're in the public service sector!"

Fair enough but one of the most successful change agents has been busy at work in Los Angeles over the last couple of years and the City of LA let him get away.

The Metrolink’s CEO, John Fenton, just took a job in Florida after spending two years turning Metrolink around. He arrived in the wake of the deadly 2008 train crash that took the lives of 25 passengers. He transformed a demoralized organization into a tight team that focused on treating passengers like guests, not cargo.

Fenton took a train system that spans 500 miles and services 6 counties, hobbled with budget constraints and bad press, and the world took notice.

While others were courting John Fenton, the City of LA debated the hold music on 311 and the background music on Channel 35.

The City of Los Angeles exports talent, from our schools, from our companies, from our public works partners, and from our municipal ranks.


When John Fenton arrived in town he declared  "Everything we do, we do for people. If we forget the human element, we will fail!"

High atop City Hall in the Tom Bradley room, the words of Thomas Jefferson are inscribed on the wall. "That government is the strongest of which every man feels a part.” I propose that the Mayor and the City Council have a basic mandate and that is to make sure that every man and woman feels a part of the City of Los Angeles.

Posted by SoapBoxLA at 1:59 AM