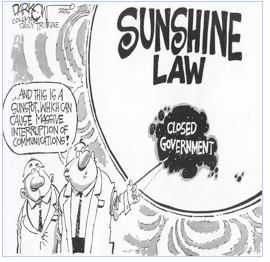 RETHINKING LA - When it comes to California’s Brown Act and Public Records Act commitment to open meetings and transparency, LA’s Neighborhood Councils are held to the same high standard as the LA County’s Board of Supervisors and LA’s City Council.

On the one hand this seems fair, after all, we’re all in this together and the spirit of the law is simply good governance.

But when the rubber hits the road, Neighborhood Councils are completely out-gunned and the result has had a chilling effect on grassroots democracy.
Neighborhood Councils continue to waste energy debating the impact of Facebook pages on their ability to engage in a public discussion without engaging in a serial meeting, a violation of the Brown Act. Unfortunately, the threat of liability has prompted some Councils to simply shut down their Social Media accounts as a solution to conducting their business openly and in accordance with the law.

Some Neighborhood Councils have been pummeled with Public Record Requests to the point that their solution is to simply refuse all documents and materials so that they can honestly respond to invasive and cumbersome requests by saying, “We have nothing!” which is an unfortunate result to the threat of liability.

Other Neighborhood Councils live in fear of violating the Brown Act through email conversations between Board members, resulting in firewalls that literally separate and isolate community members rather than bringing them together.

These three examples demonstrate the unfortunate outcome of the open meeting commitment: community members who disengage from their community and each other, all in response to threats of liability.

Terry Francke, President of Calaware, a non-profit committed to supporting and defending open government, dismisses the concerns by explaining, “The only concern of the Brown Act is that physical congregations or digital linkups, online or otherwise, not be used to build majority consensus about something the members should be reserving to meetings.  I don't know what kind of participation is contemplated, but if there's no contemporaneous or serial discussion by the majority of the same topic, there should be no risk.”

Francke knows what he’s talking about. He just settled a lawsuit with the LA County Supervisors in which he charged them with multiple violations of the Brown Act, including closed-door meetings and a conference call with the Governor, resulting in the Board paying $14,750 and including a statement regarding the September 2011 meetings in the official "Statement of Proceedings'' for the board.

On the one hand, large municipal bodies such as the County Supervisors and LA’s City Council repeatedly challenge the Brown Act and the Public Records Act with their behavior, supported by their deep pockets and their abundant legal counsel.

On the other hand, community volunteers find themselves vulnerable and overwhelmed by restrictions that have a chilling impact on their desire to engage the community and advise City Hall.

Francke suggests that it is time for Neighborhood Councils to enjoy some sunshine, in the form of a city Sunshine Ordinance.

“The ordinance would have to be done by initiative and would have to amend the city charter.  That's a tall order in terms of signature gathering, but Los Angeles residents have one advantage in such efforts that exists nowhere else in the state: the Neighborhood Councils. If most NC members, followers and alumni could agree on a common text for reform, they could provide an experienced and highly motivated corps of petition circulators to get the measure on the ballot.

“A Sunshine Ordinance could not only increase the visibility of what is done at City Hall and in the departments and the accountability of those who do it (or fail to), but address problems like the one you raise in your most recent column: the failure of adequate notice to the NCs of matters to be docketed by the council.  In broad terms, the Sunshine Ordinance strategy is pretty simple: Come up with a list of changes for which you can easily explain the need to the public, creating a reasonable agenda for public participation; present it to the council for adoption; watch the council attempt to water it down, stall its serious consideration or reject it outright; then launch signature gathering, citing the council's resistance to reform.

“I don't mean to oversimplify the task: it involves long, hard work, but for some sense of what voters will do when given a chance to play a role in controlling their own political institutions, look at the Sunshine Ordinance just placed on the November ballot in the tiny (18,000) City of Dixon, based on petitions circulated by an ardent civic watchdog and a relative handful of her friends.  You won't find a tougher upgrading of the Brown Act, Public Records Act and similar rules anywhere.  Another sunshine measure, on the Berkeley ballot, is not as demanding but does emphasize giving the public greater advance notice of items on city bodies' agendas.”

If Neighborhood Councils have any hope of keeping up with City Hall, they need a Sunshine Ordinance that keeps City Hall open and transparent without strangling the public in obstacles that can’t be overcome.

Posted by SoapBoxLA at 2:08 AM