LADOT and City Planning revisit "The errors of the past!" 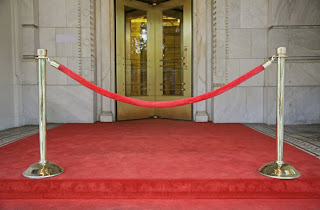 The LADOT and City Planning have a "secret meeting" planned for a select number of bike activists along with representatives from three city council offices, all in a clear demonstration that the public process is of low priority in the ongoing saga of the City of LA's Proposed Bike Plan. (aka the $450,000 two year long uncoordinated journey of professional malpractice led by the Department of "No!")

At issue is the meeting that is planned for this Tuesday @ 4:00 pm (shh! It's a secret!) where the LADOT and City Planning are intending to "preview" the new and improved Proposed Bike Plan, the one that Michelle Mowery, LA's Bikeways Un-Coordinator, referred to on KPCC Radio last week as having elements that the public hasn't seen yet. That doesn't speak well for the two year long process of gear-grinding and other infeasiBULL planning injustices.

There are two explanations for the upcoming "secret meeting" process for the Proposed Bike Plan unveiling:

1) The LADOT and City Planning have forgotten how the community meetings went in 2008, when community members complained vocally and with great enthusiasm about the fumbled opening process that was limited to four meetings of two hours each, light on dialogue and heavy on post-its and poster board. These meetings serve as a low point in the civic engagement process and perhaps the LADOT and City Planning completely forgot that to exclude is a huge mistake. Perhaps they forgot that excluding the public is a bad idea and the 'secret meeting" is the result of simple incompetence.

2) The LADOT and City Planning might remember clearly that the participation of the public raises the expectation and sets a standard for performance in excess of the departmental intentions. Bike Activists have long held that the Proposed Bike Plan process was flawed from the beginning, when the Bikeways Un-Coordinator drafted the scope of work, put it out to bid, selected the consultant, supervised the consultant, refined the initial Bike Plan proposals, implemented the infamous "Infeasible" status and then retreated into the "budget crisis" retreat that allowed a regrouping, this time claiming that there was no more money for the consultant. Perhaps the "secret meetings" is a simply calculated attempt to circumvent the public process and to get to the finish line.

Either way, this "secret meeting" is infeasiBULL!

City Council President Eric Garcetti, PLUM Committee Chair Councilman Ed Reyes, and Transportation Committee Chair Councilman Bill Rosendahl are currently participants in the "secret meeting" and their staff are collecting the names of "friendlies" (three per CM!) who can meet with LADOT and City Planning for a limited review of the Proposed Bike Plan. The Councilmembers would be well advised to reconsider their affiliation and inadvertant endorsement of this "briefing" that is, at best, a simple case of incompetence but at worst, a demonstration of subtrefuge.

The City of Los Angeles has a Bicycle Advisory Committee, one made up of 15 people representing the 15 Council Districts and 4 more people who represent the Mayor. The 19 members of the Bicycle Advisory Committee met just last week and the City of LA's Bikeways Un-Coordinator submitted a written report on, among other things, the Proposed Bike Plan. No mention was made of this "secret meeting" but that is probably because it is...a secret! How is it that the LABAC is left out of the loop? That's standard operating procedures for the LADOT and City Planning, both of which consistently fail to involve the very people our elected officials have designated as their representatives and advisors.

There is one more possible explanation for the "restricted" access of the "secret meeting" and that is the sheer size of the Proposed Bike Plan is too much or average mortals. At several hundred pages of bikeways planning fodder, light on vision but heavy on background information, the Proposed Bike Plan even has a diagram of a four-way stop intersection, just in case none of us have ever seen one. The Proposed Bike Plan has proven mildly interesting but painful to print, and even more tedious to read, all as one hopes that the vision for Los Angeles will magically appear if one simply sticks with it. Perhaps the "secret meeting" is limited to speed readers, those who can digest hundreds of pages of Proposed Bike Plan in a single sitting, offering insightful feedback and recommendations that will make us all proud and that will make LA a great place to ride.

That leaves us with three possible explanations for the "secret meeting" scheduled for Tuesday, February 16, 2010 at 3:00 pm.

Regardless of the explanation, the "secret meeting" is a flawed process, consistent with the LADOT and City Planning journey, but completely unacceptable to the people of Los Angeles who deserve accountability, responsibility, and the opportunity to participate in the process and on the delivery of the final product.

This "secret meeting" is infeasiBULL!
Posted by SoapBoxLA at 12:01 PM

Off topic: Nice job at Council today by Stephen, Enci and Dr. Thompson- you all got a discussion going which doesn't happen at Council. $30 million for less than 2 miles of bike path is ridiculous even if the council motion was only to include this bike path in the City's federal legislative lobbying effort. Congrats for showing up.

On Topic: Secret meetings are the way of inept bureaucrats. Sunshine is the best disinfectant. Always.

Anyone feel like filing for a Brown Act violation?

With all the budget cut, layoff, and furlough, you should be happy that bike program is even being discussed.

I wish there was a camera or a recap of the meeting. Did they hand out copies of the fantasy draft of the plan? You know, a version with a schedule for installation of facilities (not just "Staff shall develop a schedule for implementation").

Did it include language to amend current laws of write new ones? You know, instead of saying "Staff shall discuss implementation with the council at regular annual meetings".