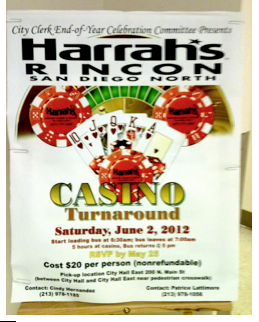 Dave Meslin, a Toronto based artist and activist, contends that typical municipal communications come wrapped in a web of barriers that alienate everyday people. Meslin contends that public participation would increase if City Hall employed the same successful standards for communication that can be found in the private sector. After all, that's where businesses die if they keep old customers informed while engaging new customers.

"Public notices should be completely redesigned as marketing materials," says Meslin, "instead of the traditional documents that are characterized by small type, lack of color, lousy graphics (or none at all) and oodles of bureaucratic gobbledygook."

It may seem like a tall order to expect the folks within City Hall to turn into marketing experts overnight but the evidence demonstrates they already have significant skills.

The hallway to the DWP's cafeteria is crowded with colorful posters that are tastefully displayed on easels, all announcing retirement parties and featuring photos and hard to resist invitations to party one more time with a beloved co-worker.

When it matters, people know how to throw a party and to invite the guests with lots of time to prepare. If only those skills were put to work on the people's business.

Perhaps if the people's business was treated as a celebration rather than an obligation, we'd see colorful notices that entice instead of confuse.

The bulletin boards at City Hall are full of well designed flyers that clearly communicate car pools in need of passengers, social events in need of participants, retirement parties in search of celebrants, and exercise clubs in pursuit of moral support.

Again, they're fun, well designed, and they successfully compete for attention in crowded hallways on cluttered bulletin boards.

The skills exist in City Hall, but the habit of erring in favor of the legal minimum when it comes to announcement, agendas, actions, and policies has resulted in what Meslin refers to as an insurmountable wall of obfuscation.

When it matters, the people within City Hall have the skills necessary to communicate as if they really wanted you to know what was going on and why you should be there if the City Council meetings were given the same enthusiastic billing.

It's up to the people of LA to demand that City Hall communicate with the public with the same degree of respect that the carpoolers, the stair masters, and the bingo junket riders get.

Posted by SoapBoxLA at 1:51 AM