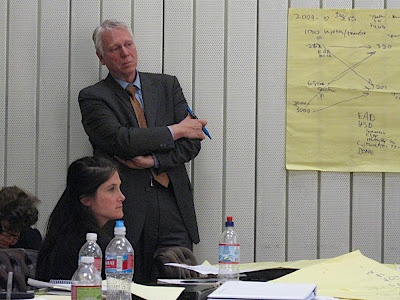 The City of Los Angeles is in flux and the resulting reorganization of the city is dividing the community into two groups, one is experiencing overwhelming crisis, the other is experiencing incredible opportunity. • Yesterday's announcement by Mayor Antonio Villaraigosa that the Department of Neighborhood Empowerment was being combined with the Community Development Department was perceived by some as a step backward while others looked at it as progress. Either way it's an opportunity, one that the neighborhood councils must seize, quickly.

• However you measure the Mayor’s decision to combine departments and the DONE restructure proposal, the crisis produced on considerable success: leaders from at least 75 neighborhood councils participated in the BudgetLA Project and had a voice at the solutions table. The BudgetLA recommendations that the City examine outsourcing the NC funding program, outsourcing elections, turning training and mentoring over to NCs and including a critical volunteer assistance program were made part of the restructure package.

• The BudgetLA community has been meeting since the beginning of the year, tackling LA's budget crisis with broad strokes and with an eye for detail. Through it all, the consistent message is "everything is on the table and must be considered as we work together to solve the budget crisis, and that neighborhood councils must be at that table as partners in the process."

To that end, the BudgetLA community has experienced unprecedented success, first with Councilman Paul Krekorian's leadership in the Environment and Neighborhoods Committee and then with Deputy Mayor Larry Frank in the Mayor's Office. This time of crisis is also the time of opportunity and it is up to the community to rise to the occasion and to deliver a vision for Los Angeles, one that results from the public taking a leadership role in reorganizing LA as a Great City.

• This past Friday, and again on Saturday, BudgetLA representatives met with Deputy Mayor Larry Frank and presented the DONE re-org plan. This plan was adopted twice with a resounding vote from the community members in attendance at the Los Angeles Neighborhood Council Coalition meeting and then again at the BudgetLA meeting.

Neighborhood Council’s have much to be proud of, including the fact that they have a place at the table as well as a role in the programming and staffing of the future Neighborhood Empowerment Department.

• In all, leaders from 75 of the 90 certified neighborhood councils participated in the BudgetLA meetings, debating much and looking for common ground. The plan that was presented to the E & N Committee and then again to the Mayor's office is simply the starting point, the beginning of the journey, one that has neighborhood councils taking a leadership role.

Neighborhood Councils have much to be proud of, including the simple fact that the community showed up with a plan and that it had an impact on the Mayor's office and the resulting reorganization of the Department of Neighborhood Empowerment. For those who call this a time for "triage" and refer to neighborhood councils as "under attack" the simple reality is this, the city is in the middle of a budget crisis and all departments and everybody feels as if they are under attack.

• Now, more than ever, we must work together to deliver a vision for Los Angeles that is based on a balanced budget, well defined priorities, efficient delivery of services, and effective evaluation of performance.

As for the Neighborhood Council system, the BudgetLA community has the opportunity to move forward as partners in developing a strategic plan for Neighborhood Empowerment based on a commitment to "grass roots civic engagement and volunteerism.

To that end, BudgetLA meets again this Saturday to review details of the Mayor’s DONE restructure –plan, consider other budget issues to target and work on next steps for the future of the neighborhood council system. Deputy Mayor Larry Frank and Special Assistant Attorney Jane Usher have been invited.


BudgetLA
February 27, 2010
10:00 am
Hollywood Presbyterian Church
Upper Terrace Hall
(enter on Yucca, park on Yucca)
1760 N. Gower Avenue
Hollywood, CA 90028
(Stephen Box is a grassroots advocate and writes for CityWatch. He can be reached at Stephen@thirdeyecreative.com)

Posted by SoapBoxLA at 9:00 AM