Speak Up! It Pays! 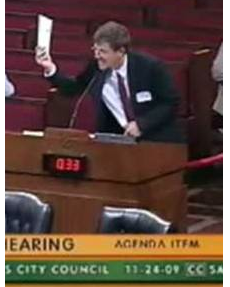 PEOPLE POWER - The trek to City Hall in order to make two minutes of public comment on an issue that appears to be a done-deal can be such an idealistic but unrewarding experience. But three different campaigns demonstrated that it really does make a difference.

● The City of LA’s Administrative Citation Enforcement program was well on its way to the City Council, fueled by such confidence that Councilman Koretz released the victory announcement in advance of the victory. He should have waited.

For two weeks in a row, opponents of the City Attorney’s proposed version of the ACE program spoke before the Budget & Finance Committee, raising enough concerns to prompt Councilman Rosendahl to declare "This ordinance is half-baked!"

Community leaders built websites such as StopLADOT and Palisades Parking Patrol, organized citywide pickets, and petitioned their government in the form of public comment.

It took a couple of motions, the first one completely ineffective and the second one more convincing, before the City Attorney issued a statement acknowledging merits of the public argument:

“The Los Angeles City Council approved a motion on October 12, 2011, suspending enforcement of LAMC Section 80.53. While Section 80.53 is suspended, an owner or lessee may park on the apron as long as no portion of the vehicle touches a sidewalk or projects into the street in violation of California Vehicle Code Sections 22500(e) and (f), respectively. Enforcement of California Vehicle Section 22500, in its entirety, will remain in full force and effect. In addition, other sections of the Los Angeles Municipal Code regulating "parkways" shall also remain in full force and effect.”

● The third round of public comments to result in a victory came from the residents of East Hollywood who were in search of relief from the “code enforcement zealots” responsible for 177 over-in-height fence citations that resulted in fees, fines, and penalties that then resulted in liens, garnishments, and legal actions.

The journey to City Hall took four months and began with a dozen weekly neighborhood walking tours to engage the community, the local LAPD Captains, the businesses, and community groups. The East Hollywood Street Beat mobilized on the streets and then went indoors, transitioning into the LA City Works civic engagement training that prepared them for their public comments at City Hall.

The East Hollywood residents spoke out at the Budget & Finance Committee in opposition to the proposed ACE program and then returned to City Hall to protest the Building & Safety citations that they claim “criminalize the residents while ignoring the criminals!”

City Council President Eric Garcetti stepped out of the City Council proceedings, passing the gavel to Councilman Zine, and listening to the stakeholders’ stories of the complaint driven system of code enforcement that has resulted in uneven application of the law and selective prosecution of code violations.

Garcetti brought in David Lara from Building & Safety and Jane Usher from the City Attorney’s office and set three solutions in play.

1) A moratorium on over-in-height fence and front yard use code violation enforcement and prosecution.

2) A moratorium on the collection of fees, fines, and penalties as well as a moratorium on liens, garnishments, and legal actions for non-compliance.

In each of these three examples, the work is far from done, but it’s much farther along than it would have been if the public had remained silent.

These three campaigns, from the opponents of ACE to those cited for Apron Parking to the victims of zealous Building & Safety citations, all demonstrate that it pays to speak up and to partner in solutions that improve the quality of life in our neighborhoods.

(Stephen Box is a grassroots advocate and writes for CityWatch. He can be reached at: Stephen@thirdeyecreative.net.)