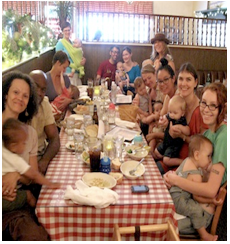 RETHINKING LA - My wife Enci and I have marched in the streets, we’ve turned out with signs and picketed, we've Stormed the Bastille, ridden Critical Mass, and filibustered public meetings from the public speaker’s podium. We’ve gone to Sacramento, we’ve spoken Truth to Power, and along the way we’ve sat-in, stood-up and even laid-down in a die-in.

But this weekend was a first for us. We joined dozens of nursing moms and their families at a local restaurant for a Nurse-In, all in response to a recent incident when a nursing mom was asked to feed her child in the bathroom.
The original incident and the resulting Nurse-In both took place at Scarantino’s, a small family-owned and operated restaurant with a 45 year legacy that includes this mission statement; “We want our service to be such that every customer feels as welcomed guests in our home.”

A woman joined her family for a celebratory dinner and began nursing her child at the table. Another guest complained and an employee of the restaurant asked the nursing mom to leave the dining room for the more intimate bathroom.

Personally, I’ve never asked a guest in my home to eat in the bathroom and I can’t imagine how a nursing mom would consider herself a welcomed guest when banished from the dining room.

More importantly, it’s the law and nursing moms have California Civil Code, Section 43.3, on their side. "Notwithstanding any other provision of law, a mother may breastfeed her child in any location, public or private, except the private home or residence of another, where the mother and the child are otherwise authorized to be present."

It takes two kinds of ignorance to ban a nursing mom from a public place. The first is simple ignorance of the law. The second is a far deeper form of ignorance, one that stigmatizes a natural and healthy practice that has been around a lot longer than the hang-ups that might motivate someone to complain when they see a mother nurse a child.

Nursing moms have been in the news a great deal of late, typically involved in incidents where an employee or security guard seizes that rare moment of power where they get to say “No! Put that Boob away!”

Denny’s was the subject of Nurse-Ins over the weekend, all in response to a mom who dared to nurse her child at the table with the rest of the family. LACMA recently incurred the wrath of LA’s increasingly larger community of nursing moms when a security guard asked a nursing mom to get a shroud or leave the public place.

Time magazine took on the subject and took the provocative route less traveled when it posted a nursing mom on the cover along with her three-year old son.

The decision to nurse a child is a huge commitment that includes positioning a growing child’s nutritional needs as the driving force that determines schedules and nursing activity.

Nursing moms experience a formula-centric environment that views the lactating breast as an affront to all that is perfect about our upside-down prioritized culture.

When Enci and I made our first visit to the Pediatrician, we were given a lovely gift bag that turned out to be filled with formula and formula accessories. Liquid formula, powdered formula, small bottles, flat bottles, large bottles, bottle warmers, bottle coolers, bottle insulators, and it all matched.

It wasn’t until we did our own research that we discovered that Enci should be eating more oats, ginger, avocado, dates, and coconut milk. We navigated the course on our own as we uncovered all of the “anti-plactagogues” that are common in our diet, including parsley, peppermint, spearmint, and sage.

Imagine that! So many foods that interfere with lactation and not a word from our corporate sponsored Pediatrician.

As for Scarantino’s, the Nurse-In took place on the sidewalk and in the restaurant.

The sidewalk was covered with playmats and families made themselves at home with children, toys, and nursing moms and happy babies. On such a busy street, the sidewalk took on a festive mood not typical of protest actions. There were protest signs and the mom who suffered the original insult was there, refusing to spend another dime at Scarantino’s until she received an apology.

Inside the busy restaurant, the tables were full, and nursing moms were the dominant force in the noisy dining room.

Three elderly guests who arrived in the middle of the Nurse-In sat down next to us with a grumble, advising the manager that perhaps it was time to call the police on those who blocked the sidewalk. They quickly dropped the subject when it came time to order and proceeded to grill the waiter on the ingredients of dishes, explaining that they all had very specific dietary restrictions.

I couldn’t help but wonder how long it will be before waiters are as sensitive to the diet of lactating moms as they are to the dietary restrictions of seniors, but that is for another day.

Baby Sydney charmed our geriatric neighbors and we enjoyed a very delightful and delicious dinner, complemented by excellent service, and not an eyebrow was raised as nursing children throughout the dining room enjoyed their meals along with their families and strangers alike.

To quote a mom, “It was a delicious protest!”

It was also much more. It was successful.

The manager involved in the initial incident admitted that he didn’t know the law and acknowledged that he broke the law. He added that he didn’t want litigation. He stepped outside and approached the mom who was originally asked to use the bathroom when nursing her child and he apologized, getting a hug in return and earning a great deal of respect from those who watched him swallow his pride and treat the moms as if they were welcomed guests in his home.

Enci enjoyed the community of nursing moms and found the protest to be an uplifting and positive experience. Sydney made some new friends and left his first protest happy and well-fed. As for me, I was thrilled to participate in civil disobedience that revolved around a dining table, one that was loaded with such a delicious Italian meal.

Posted by SoapBoxLA at 2:22 AM