What NCs Learn from City Council: Some Good, Some Bad, Some Illegal 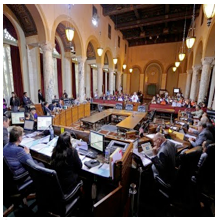 There are a few problems with this scenario.

The first is that the professionals who run the largest city in the most populated state in the most powerful country in the world can’t show up on time, leaving the public to watch as the City Council President send assistants to call Councilmembers, urging them to get to Council Chambers so that the City Council can convene the meeting.

There’s no greater insult to the public than to run the meetings with a stopwatch as a tool for controlling the public but as the same time forgive tardiness from the members. It’s an unacceptable double-standard.

The second is that the presiding officer has a charming habit of filling that non-quorum dead-air with announcements, public comment, and other “noise.” This may fill the dead air, but it also sends a clear message to those who have shown up to participate in the people’s business that their public comment won’t even make it to the traditional deaf ears, it will simply be directed at empty seats.

The third problem is that the City Council considers the “noise” that takes place as they scramble for a quorum as sufficient public comment to satisfy their Brown Act requirement to provide the public the opportunity to address the body during the meeting for public comment. It doesn’t.

This is where Neighborhood Councils find themselves imitating the City Council and then breaking the law.

The City Council and the Neighborhood Councils alike are required to agendize their meetings with four minimum elements that include public comment on items not on the agenda.

It’s not optional or suggested it’s required. When the Council finally reaches quorum is when the public gets its opportunity to speak, even if they’ve spoken before the meeting started.

If the Council finds itself pressed for time, that’s a limitation that is the responsibility of the Council, not the public and it is not justification for the Council to dispense with their mandate to provide the public with the opportunity to address the Council with public comment.

As for that “dead-air” time that takes place as the Council waits for a quorum, one way to deal with it would be to spend that time searching for members of the public who would like to occupy those empty seats. That would be a much better use of time, it would address the cavalier behavior of the non-quorum councils, and it would motivate tardy members to show up on time.

Posted by SoapBoxLA at 2:17 AM