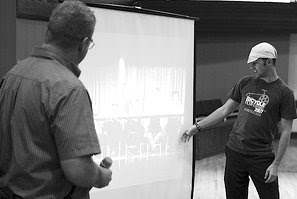 Erik, Alex and I were invited by Antioch University to present at their all-day "A Future Without Cars" forum, an event that featured urban planners, environmentalists and bike activists challenging the grad students and faculty from Antioch to imagine a better way.

All three of us chose to PowerPointificate on our unique approaches to changing the world, one bike at a time, and on reflection, I note that we represent fully one-quarter of the Bike Writers Collective. (One of the effects of spending time with Dr. Alex, our resident mathematician, is that I see things more statistically than before!)

Erik, one half of the Homegrown Evolution duo, opened strong with his sustainable approach to riding a bike and took us on a journey over the last century, painting a dismal picture of the decline of society and the direction our communities are headed. His call to action literally challenged the audience to get up on their high horse and ride a bike, as a duty, an obligation, an imperative if we are to truly change the world. 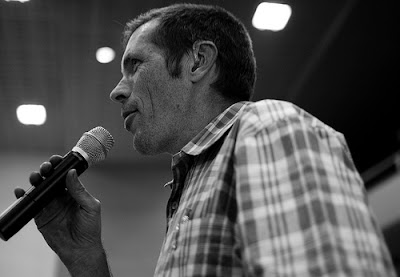 I've seen Erik's presentation at Caltrans and at USC and I enjoyed it as much, if not more, than ever. Okay, I enjoyed it more. This time he added a new close, pointing out that LA has a car-free population comparable to San Francisco and Chicago (10%) and that for many this isn't a "change the world, reduce the carbon-footprint, lose some weight, etc." choice, but simple economics. For many the bike isn't a statement but a simple brutal reality of not having the money to operate an automobile. It is at this point that Erik positions riding a bike in LA and our support of riding as a civil rights issue. Strong finish!
Alex took off on a journey that promotes the use of F.U.N. as a tool for encouraging cyclists, a journey I felt compelled to interrupt, pointing out that the best way to encourage cycling was to promote the rights that cyclists possess and to affirm those rights and inform the community.

That was the opening shot of the F.U.N. vs. Rights debate, a mano y mano battle that went to the wire, with Alex giving detail on how bike culture has grown exponentially over the last couple of years because of the success of the many rides that were simply fun. These rides drew people in, gave them skills and confidence and utilized the many popular social networking hubs to create a foundation of communication and community that has resulted in a strong presence on the streets.

I conceded that riding a bike is fun but pointed out that one by one, every single right articulated on the Cyclists' Bill of Rights had tested, challenged and violated on one of the many rides over the past couple of years and that if cyclists didn't know they had rights, they were likely to accept violations, limitations and restrictions without question and that this had a dampening effect on bike culture. On the other hand, cyclists equipped with knowledge of their rights, riding a bike with the Cyclists' Bill of Rights spoke card tucked into their spokes, were a force to be reckoned with and they were on their way to changing the world.

We both conceded that the other had made good points. Alex exclaimed "Hey you got Rights all over my F.U.N.!" and I acknowledged "Hey, you got F.U.N. all over my Rights!" and we agreed that it was a draw, but we both vowed to prevail on the inevitable rematch.

Posted by SoapBoxLA at 1:53 PM