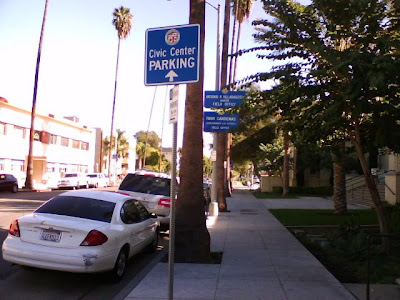 One would think that with so many Federal, State, County and City departments represented on this property, someone would be familiar with the Los Angeles Municipal Code or at least know how to locate somebody with a copy and a bit of understanding of its contents.

LAMC 12.21 specifies the requirements for bicycle parking, something that I thought was nonexistent at the Civic Center or on the public sidewalks that wrap the Center. I was wrong but not by much. 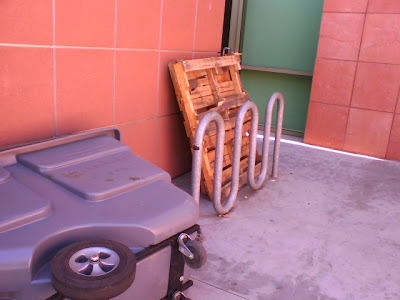 In the back of the Marvin Braude Center I found this Wave rack complete with custodial equipment chained to it. There are many things wrong with scenario including the location, the proximity to the emergency exit, the uselessness of the Wave racks and the fact that is was being used as storage by the custodian.

I snapped a picture of the bike rack which drew the attention of a City Security Officer who informed me that the City "frowns on someone taking pictures of the back of the building."

I pointed out that "frowning" was a long way from "prohibiting" and that taking a picture of a public facility while standing on public property was within my rights and that I could not take responsibility for his "frown."

He asked me to follow him to the Security Office. I declined and continued with my business, returning to the courtyard of the Marvin Braude Center. Officer Ruiz followed and was joined by two more security officers, officers who might be referred to as "Venti" and who were also frowning.

I used my camera, which also doubles as a cell phone, to call for backup which consisted of the Mayor's staff who were busy coordinating the Mayor's press conference in the Courtyard, complete with a half dozen television crews and several still photographers. The Mayor's rep intervened and the security allowed me to continue with my business, offering a concluding "We frown on that type of behavior!" as they walked away.

Personally, I think that if anything is "frownable" it is the fact that the Civic Center has better accommodations for shopping carts than for bicycles. It's also "frownable" that our City's security officers would think that cell phone cameras outdoors in a public place are a security risk. 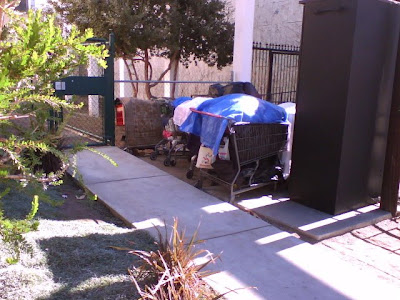 Posted by SoapBoxLA at 1:09 PM

I frowned at your story, but smiled at the shopping cart amenities.