Budapest’s April Mass went to each of the four parliamentary party headquarters where participants massed in the streets with bikes overhead and delivered petitions and recommendations for improving bicycle transportation in Hungary.

The President of the Republic of Hungary rode the Mass, the Budapest City Council responded positively, the Ministry of Economy and Transportation created the post of Ombudsman of Bicycle Affairs and the “Tour de Votes” motivated all four parties to include bicycle programs in their current platforms.

SoapBoxLA was set to ride the Budapest Critical Mass!

Drums could be heard in the distance as SoapBoxLA crossed from Buda to Pest on the Chain Bridge. In the distance a small group of men carrying a Hungarian flag disappeared up the street. Farther on, several men were busy on the sidewalk painting banners on sheets with brushes and black paint.

On the shore of the Danube stood the Parliament Building. Loud music could be heard through the streets. Somebody was giving a speech, a very loud speech.

And yet, not a bike in sight.

One small, cobblestone street led to another and the noise grew louder until the streets opened onto the square in front of the Parliament Building where thousands of protesters were gathered. 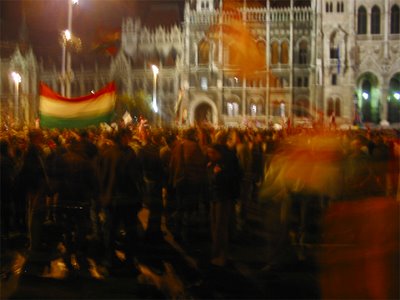 The Critical Mass had given way to a revolution of sorts. National Television was seized by protesters, a couple of hundred people were injured, the Parliament Building was shut down and then surrounded by Riot Police.

Locals seized the opportunity to both practice their English and to voice their demands. Employment, health care, inflation, corrupt government and the clash of political agendas were frequent and common issues of complaint.

The topics were familiar but the energy and passion was unique. It was exhilarating, it was passionate and it was humbling.

SoapBoxLA went for a bike ride, stumbled into a Revolution and came home challenged, inspired and reminded that change takes place when people use their feet, literally! 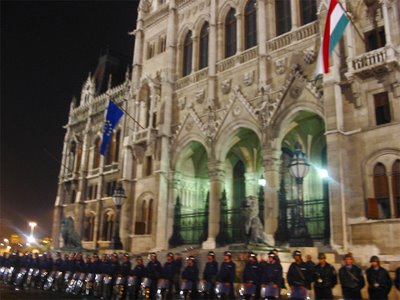