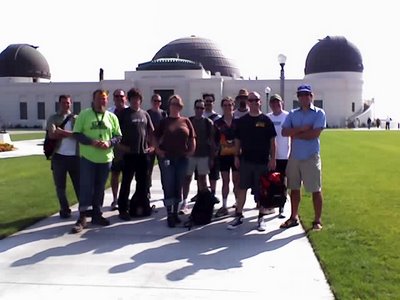 MT. HOLLYWOOD, CA - The Los Angeles County Bicycle Coalition was invited to a preview of the newly remodeled Griffith Observatory this past weekend.

Cyclists gathered at Barnsdall Park on Hollywood Boulevard and then rode up the Fern Dell Drive/Western Canyon Road/East Observatory Road route. This route is 2.3 miles from Los Feliz to the Observatory and is a long steady incline.

(El Jimmy was first to arrive at the top and he was riding a single speed!) The rest of us were content to draft.

The other route for cyclists (and hikers) is the Hillhurst Avenue or Vermont Avenue to Vermont Canyon Road route that is a little steeper, goes past the Greek Theatre and is 1.6 miles short. 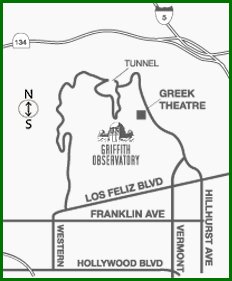 Both routes are worth the ride, the view at the top is stunning, and simply riding your bicycle to the Griffith Observatory has now become a political statement.

After a long and sometimes contentious lobbying process, the plan was revised in the 11th hour and access is now open to cyclists and hikers.

And so we rode, to celebrate. And that’s what riding a bicycle is all about, celebrating.

It’s a celebration of the fact that “getting there” is just as much a part of the adventure of life in Los Angeles as “being there.” 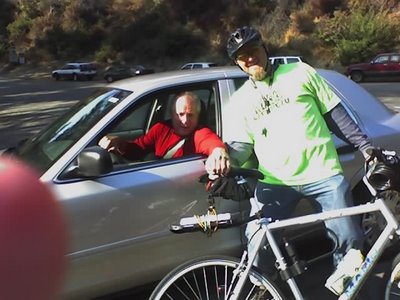 Tom LaBonge welcomes a cyclist to the Griffith Observatory

Congrats, Stephen! You worked hard for this one. Let's do this ride sometime. I need the workout. Email me with your next trip up the mountain...