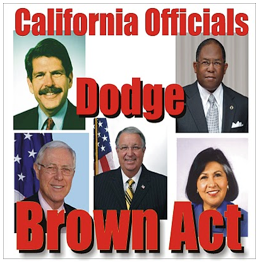 RETHINIKING LA - The mere suggestion that it might be time to revisit California’s open-meeting law with a Sunshine Ordinance draws two kinds of responses, best summed up as “It’s about time that common sense prevailed!” and “Have you joined the regulatory race to the bottom?” California’s Brown Act is currently under attack amidst charges that it is an outdated law that lacks contemporary teeth, allowing the more sophisticated municipal authorities to abuse it while the smaller community based parties find themselves encumbered by its complexity and liability.

On the one hand, the LA County Board of Supervisors acts with complete disregard for the Brown Act requirements that the people’s business be conducted in public. On the other hand, Neighborhood Councils close their Facebook accounts and create email firewalls out of fear that their digital conversations might qualify as a serial meeting in violation of the Brown Act.

As for Terry Francke’s suggestion that it might be time to follow the lead of other cities, both small and large, with an updating of the half-century old Brown Act, the feedback was both supportive and dismissive. And now it’s public!

On the one side came this message from a former member of the US Foreign Service who also participated in his local Neighborhood Council and points to the Brown Act as one of the reasons for dropping out.

“It seems to me that the spirit if not the letter of the Brown act could be preserved without “secret cabals and back-room politics”  if written communication between NC members (e-mail) was permitted as long as copies were sent to the NC archives.

“Anyone could read them there (even though it seems very few care about anything), and so the history of how a decision was reached could be preserved, without it all having to be done orally at NC meetings squeezed for time and often in confusion.

“None of the things an NC does are inherently secret, but having more time, over a matter of weeks instead of minutes, could result in better drafted resolutions with a chance to think about them and ponder unintended consequences for a while before a vote is taken.  Most of the problems I have seen come from the perceived prohibition on pre-meeting discussion of a topic.

Haste may make waste, but it also results in bad politics.”

Speaking for the other side came this response from a lawyer who is an expert in the Brown Act and the Public Records Act, both of which he relies on as he advocates on behalf of the people.

“Your complaint is that so many people violate the law that we should abolish the law.  If the law were stupid, like the pot laws, yes, but if the laws protect us from fraud and cronyism, then No. We need better education, but some people like ignorance.”

“If you tinker with the Brown Act for NCs, you'll find huge loopholes for City Councils, etc.  Already, the Brown Act is very weak on remedies.  The last thing this country needs to do is to encourage more fraud.

“Corruption and incompetence are the core evils that are killing LA and the nation as a whole.  In fact, corruption has spread far into Europe.  We need more ethical people and reducing laws that require them to act right even when they do not want to will never build a moral society.”

While the debate over the Brown Act continues to simmer, it’s clear that the current scenario must be addressed with better education and enforcement so that those who are violating California’s Open Meeting commitment are held accountable while those who are acting appropriately can be relieved of the fear of liability and legal action.

Through it all, it is incumbent on our leadership to set the standard for compliance and for enforcement with their behavior.

In other words, it’s up to the people to hold the LA County Board of Supervisors accountable and for the City Council, Committees, and Commissions to demonstrate an inspired approach to conducting the people’s business in an open and transparent manner.

Posted by SoapBoxLA at 2:10 AM