Neighborhood Councils: Do They Matter? 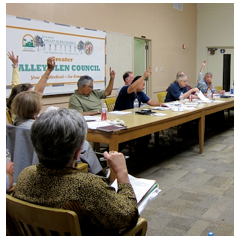 RETHINKING LA - LA’s Neighborhood Councils are finally getting some respect, unfortunately it’s from admirers who live in cities such as London, Toronto, and Nagoya who look to LA and find inspiration.

As for hometown love, Neighborhood Councils find themselves struggling to get attention in a city that threatens their survival each budget cycle, challenges their purpose when convenient, and ignores them when they dare to advise City Hall.

As Neighborhood Councils kick off election season, the first challenge comes in the form of a yawn, first from City Hall and then from the community, followed by the tough question “Do neighborhood councils matter?”

The answer from fans in Toronto is “Yes!” and a picture of the front door of the Department of Neighborhood Empowerment is part of an exhibit called “The Fourth Wall” which is challenging the notion that government takes care of the people’s business while the people play the role of spectator.

In London, activists and politicians cry “Yes!” and are looking to LA’s Neighborhood Councils for inspiration as they embark on a mission “to rediscover London as a collection of villages" and to address the budgetary tug-of-war between City Hall and the 32 borough councils.

The Mayor of Nagoya yelled “Yes!” and left his career in national politics to move into the real source of power, the local level, embracing LA’s Neighborhood Council concept and making it his own, demonstrating that imitation is the most sincere form of flattery.

But if the people of LA step up, the answer will be a resounding “Yes, Neighborhood Councils matter!”

Neighborhood Councils are simply people. They are you. They matter if you matter and they matter if you believe in an engaged community, in transparent governance, in a direct route to City Hall, and in seizing the opportunity to hold city government accountable.

But the real answer to the question “Do Neighborhood Councils matter?” comes from you, the individual who must ask yourself the tougher question “Do you matter?” If the answer is “Yes!” then Neighborhood Councils matter because they are you and they are your best opportunity to ensure that City Hall listens to you, treats you with respect and delivers the City Services that you pay for.

Really, it’s all about you!

The Education and Neighborhoods Committee will be hearing two important issues this Tuesday pertaining to Neighborhood Councils- 1) A CLA recommendation on how much NCs should be docked toward the cost of NC elections; and, 2) A detailed DONE report on who’s in and who’s not on Neighborhood Council Elections.