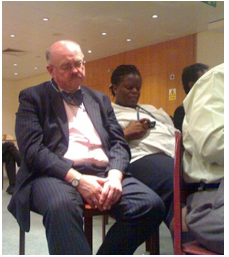 RETHINKING LA - Neighborhood Councils face many obstacles as they set out to “promote more citizen participation and make government more responsive to local needs” and the most formidable is the threat of “Death by Meeting!”

The loudest message that Neighborhood Councils can send to City Hall is not by email or by Community Impact Statement or by Board Resolution, it’s with behavior.

If Neighborhood Councils are committed to “promoting more citizen participation in government,” it will start with better agendas that actually inform the public and entice them to participating, not the current City Council knockoff that requires a bureaucratic decoder ring to figure out that ZA-2012-454-CE has something to do with that restaurant everybody is excited about and that ZA-2012-2258-CUB has something to do with the development that is causing much dismay.

When journalists cover Neighborhood Council meetings, they make them sound interesting by talking about the relevant topics that were discussed, the passionate speakers who participated, the delicious fare from local eateries that some councils feature.

Tiffany Kelly, now writing for the LA Times, had a knack for storytelling that turned ordinary and routine meetings into the local marketplace of ideas, stirring interest in her readers and prompting them to participate in local events.

The Woodland Hills Patch is able to convey the entire agenda of the Woodland Hills - Warner Center Neighborhood Council in simple language that makes it sound interesting, inviting, and even relevant.

If Neighborhood Councils are able to entice the public to participate, the next step to avoiding “Death by Meeting” is to make things interesting.

That greeting must be followed up with an introduction and a process that is inviting, not exclusive. Sign-In sheets and Speaker Cards are an option, not a requirement. Participation is the right of the public, not a privilege, and the process should reinforce that at every turn.

Once the public is in attendance, make the meeting interesting and avoid repeating the painful housekeeping tasks that kill a meeting.

Watching a Board debate corrections to meeting minutes is a sure-fire way to communicate “contempt of public” to an audience that is there to partner with the Council in making the neighborhood a better place for everybody.

Successful Neighborhood Councils know their audience and organize the agenda accordingly. Only the sadistic can look at a room full of people in attendance for an agenda item and hold them through all kinds of painful “business” while the energy in the room is depleted as a dwindling crowd waits for their topic.

Finally, if Neighborhood Councils have any hope for engaging the public and “making government more responsive to local needs,” it will start with a well-organized agenda that allows speakers and audience to plan their evening and know when their item will be heard.

Lots of people who present to Neighborhood Councils could attend two and three evenings if there were some method of actually organizing meetings so that presenters didn’t sit for hours looking at the agenda and wondering if they missed their moment of glory.

This isn’t about one person’s time being more important than another person’s, it’s about operating efficiently and with respect so that Neighborhood Councils can draw more, not less, interaction with City Management, Neighborhood Partners, local organizations, and the public.

The quickest way to end “Death by Meeting” is with agendas that are written for the public, programming that plays to the audience, and meeting time management that encourages participation.

Posted by SoapBoxLA at 2:11 AM