LAPD Chalks Its Rubber Bullet Behavior Up to Vandalism 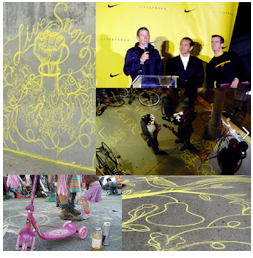 HOW LA’S DOWNTOWN ARTWALK BECAME A CRIME SCENE - When Lance Armstrong came to Los Angeles for a bike ride with 700 of his closest friends, the streets ran yellow with chalked messages of hope and encouragement. Mayor Villaraigosa and then City Council President Eric Garcetti stood in the middle of a heavily chalked Sunset Boulevard to welcome Lance to Hollywood and then the LAPD arrived, not to arrest the chalkers, but to escort the cyclists down Sunset and up Vine to the Ricardo Montalban Theatre.

Waiting inside were Ben Stiller, Ben Harper, Shepard Fairey, LiveStrong CEO Doug Ulman and Nike CEO Mark Parker. It was a night that celebrated the power of Art, Culture, and Sports in changing the world.

For the hundreds of people who couldn’t get inside the Theatre for the program, the streets were their canvas and they spent the evening leaving their mark with yellow chalk provided by LiveStrong.

The LAPD never objected. In fact their supportive presence lent an air of legitimacy to the activity, after all, it was just chalk.

About a month later, Jesus Castillo was riding his bike home from work when he was run down from behind by a drunk driver who pinned him against a parked car, backed up, and then drove away leaving Jesus to die on Glendale Boulevard in Echo Park.

Cyclists descended on the scene with a Ghost Bike and boxes of chalk, memorializing the tragic incident with a die-in ceremony and with chalked messages that filled Glendale Boulevard.

The LAPD were there in force, standing by as the press covered the event, under the watchful eye of Eric Garcetti’s Deputy.

The streets were yellow, the LAPD were mellow, and eventually everyone rode off into the night.

Chalking the streets is one of the most non-invasive mechanisms of communication available to the masses, it’s quiet, cheap, temporary, and it’s actually quite fun.

Doubters only have to look at events such as Park(ing)Day LA, ArtCycle, and the Olive Festival where children are thrilled to fill the streets with chalked artwork and adults marvel at the skills of the internationally recognized chalk artists who come from around the world to ply their trade, street chalking.

It’s against this backdrop that the LAPD’s actions of last week must be examined.

According to reports, OccupyLA protesters took up arms, in this case pastel chalk wrapped in paper with notes explaining their position, and the seeds of discontent were sown on the streets of Los Angeles during Downtown LA’s monthly Art Walk.

The LAPD responded, there was an acceleration of tension, a tactical alert was called, and the LAPD arrived from all over the city armed with less-than-lethal weapons which they unleashed on the crowd.

The LAPD Commander on the scene gave the command and LAPD officers fired rubber bullets, bean bags, and tear gas at the Art Walk crowd, many of whom claim they were caught in the midst of an action that came with no warning and no opportunity to evacuate.

As the debate over how a non-violent pastel chalk protest turned into a violent melee continues, a petition is circulating calling for an investigation into the LAPD’s heavy-handed handling of the incident.

At the heart of the matter is this simple question. How did the LAPD allow itself to be so easily goaded into less-than-lethal violence in the middle of a crowded public event?

When participants in an advertised Chalk Walk during a crowded Art Walk can so easily draw a violent response from the LAPD, it’s time to evaluate the performance of the professional peace officers responsible for the largest city in the most populated state in the most powerful country in the world.

As one chalker wrote: “Thanks for tainting the justice system.”

We really do deserve better!

Posted by SoapBoxLA at 2:19 AM